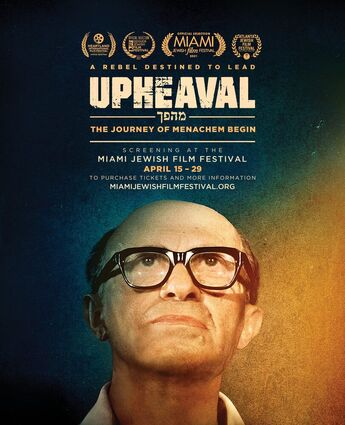 Long-time philanthropist, community leader and dedicated Zionist, Bruce Gould has a new role - producer of a documentary portraying the complex and consequential life of the late Israeli prime minister Menachem Begin, whose 1977 meeting in Jerusalem with Egyptian president Anwar Sadat was an act of unprecedented courage and a turning point for the Jewish state.

The film is debuting in Florida at the Miami Jewish Film Festival, running virtually from April 14-29. Titled "Upheaval: The Journey of Menachem Begin," it is the only English language feature documentary ever made about the bold but controversial statesman, and it holds important leadership lessons on taking responsibility, building unity, and recognizing the need to compromise for today's leaders as they navigate our country's fractious divisions.

Gould's involvement began two years ago in Miami Beach when he was introduced to Rob Schwartz, executive producer and the visionary behind the film. Schwartz conceived the idea for "Upheaval" after reading about Begin in Yehuda Avner's book "The Prime Ministers." His enthusiasm for the project was infectious, said Gould.

"I took to Rob right away and liked the idea of working on a production like this," said Gould. Indeed, the film's portrayal of the Holocaust experience as a central driver in Begin's life carries a special resonance for Gould, who is a board member of the Holocaust Memorial Research & Education Center of Florida, an organization that "uses the Holocaust as a teaching tool to explain why it happened and how to prevent it from happening again."

An attorney and the former principle of law publisher Gould Publications Inc., Gould is also former vice president of The Roth Family Jewish Community Center of Greater Orlando. Among other activities, he chairs the Touro College & University Foundation Board.

Gould said he became a Zionist after he went to Israel for the first time in his early 30s. He fell in love with the country, he said, made many friends and got involved with organizations there, such as the Ammunition Hill Memorial and Museum, the site of a fierce battle during the 1967 Six-Day War. Today, he is a frequent visitor to the Jewish State and sees the film as a vehicle not only for telling Israel's story through the lens of Begin but also as a way to give back and help people understand what a special place it is.

"This movie brings together my interest in Israel and my understanding of the Holocaust. Every decision Begin made was viewed through the prism of the six million lives lost in the Holocaust and defending the dignity of the Jewish people," said Gould.

Indeed, a major theme of "Upheaval" is the centrality of the Holocaust experience to Begin's life and his leadership of Israel.

"One of the main goals in telling the story is to understand how the Holocaust infused Begin's attitude about his fellow Jews, Israel and the rest of the world," said Jonathan Gruber, director of the documentary.

The film chronicles Begin's life, starting with his birth in the Polish city of Brest, or "Brisk." It tells of his early days as a young activist and Zionist and the bitter memories of the loss of his entire family in the Holocaust. It follows his imprisonment by the Russians and eventual release and journey to Palestine in 1942 where he led the Irgun, the paramilitary force that fought the British in Mandatory Palestine. It recounts his election to the Knesset and later, as the prime minister who initiated the historic meetings with Egyptian president Anwar Sadat. It shows how a man who himself persevered through anti-Semitism and abuse welcomed Jews and others into Israel, no matter their color or ethnicity, and lobbied for the rights of Israeli Arabs and for the Sephardim - Middle Eastern and North African Jews.

"He brought in the Ethiopian and Russian Jews. Even Vietnamese refugees," Gruber said. "He emulated the biblical Abraham and [said] 'We'll be a good host.'"

Importantly, the film does not ignore the complexities of the choices Begin made on behalf of Israel and the controversies that hounded him, such as the bombing of the King David Hotel in Jerusalem and the tragic Altalena Affair, which in some quarters earned him the label "terrorist." Later, as prime minister, he made other difficult, sometimes unpopular decisions, including giving up the Sinai as part of the 1979 peace treaty with Egypt. His actions, said Gould, hold lessons for today's leaders, who he said avoid making decisions as they "try to appease their base."

"They will see what Begin sacrificed and that he didn't make easy decisions - he made hard decisions," said Gould. 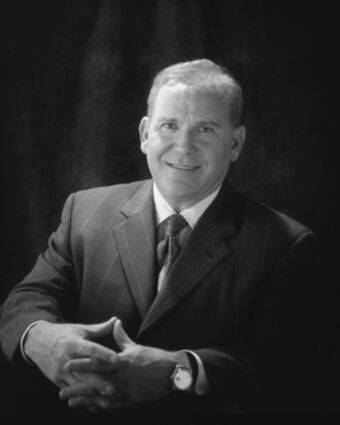 In the end, the message of "Upheaval" is of Begin's courage, leadership and uncompromising dedication to Israel and the Jewish people, all of which have inspired Gould and his belief that Begin's story has important lessons for our time.

"He lived the Holocaust and understood that the only way we can prevent it from happening again is the State of Israel," said Gould. "We need to tell his story."

"Upheaval: The Journey of Menachem Begin" is exclusively available virtually at the Miami Jewish Film Festival from April 14-29 to all Florida residents. To purchase your ticket, visit: miamijewishfilmfestival.org.

For more information on the film: https://www.upheavalfilm.com.