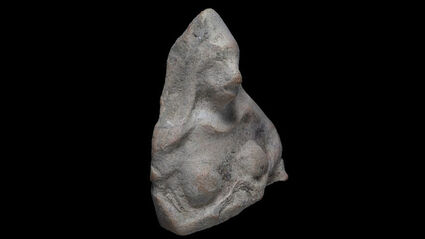 The biblical-era pottery figurine found by an 11-year-old Israeli boy on a family trip to the Negev.

(JNS) - An 11-year-old Israeli boy has uncovered a rare, 2,500-year-old amulet during a family excursion in the northern Negev Desert, the Israel Antiquities Authority said on Tuesday.

Zvi Ben-David of Beersheva came across the pottery figurine in Nahal Besor. He showed it to his mother, a professional tour guide, who contacted the IAA.

According to Oren Shmueli, the IAA's district archaeologist for the western Negev, the statuette, depicting a bare-breasted woman wearing a scarf, was believed to protect children or increase fertility.

"The figurine that Zvi discovered is rare and only one...