The next major Jewish action is on behalf of Uighurs 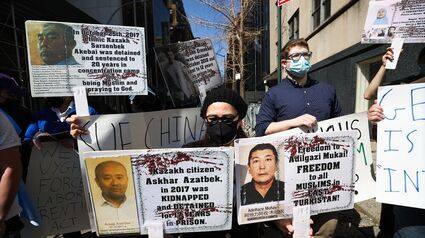 Protesters against China's policies toward the Uighurs demonstrate outside United Nations headquarters in New York City, March 22, 2021. The protester in the foreground is wearing a kippah.

(JTA) - When Rayhan Asat attended a Passover seder last month, its contours seemed familiar and different at once - especially the tradition of leaving a seat empty at the table.

It reminded Asat, a lawyer, of leaving a seat empty for her brother, Ekpar, at her graduation from Harvard Law School in 2016. Ekpar, a member of China's Uighur minority, had been "disappeared" by the Chinese government.

Jewish World Watch, an anti-genocide group that hosted the online seder for Uighurs on March 30, suggested that families leave a seat at the seder table for the more than a million people whom Ch...