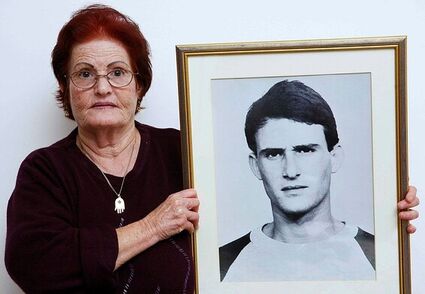 Galia Tamam holds a picture of her son, Moshe, who was murdered by Palestinian terrorists in 1984.

According to local media reports, following his release, Abu Makh, a member of a cell that abducted and murdered Israeli soldier Moshe Tamam in 1984, returned to his home in Baka al-Gharbiyeh, where locals waving Palestinian flags were waiting to welcome him.

In an interview with Army Radio on Monday, Moshe Tamam's brother Oren demanded that Israel strip Abu Mukh of his citizenship.