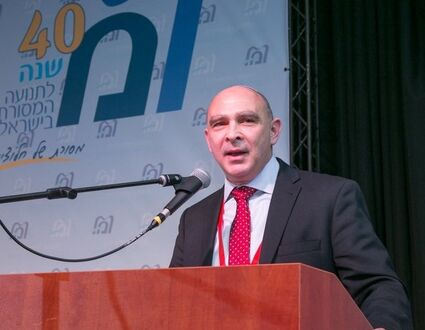 Temple Israel is proud to host a Zoom talk from Rabbi Mikie Goldstein, titled "Halachic Challenges and Responses for LGBT People in the 21st Century" on Sunday, May 2, at 10 a.m. The Zoom meeting ID is 830 4261 6327, and the passcode is B8ieDz.

Rabbi Mikie Goldstein is originally from Liverpool, UK, and made aliyah in 1989. He received his rabbinic ordination in 2014 from the Jewish Theological Seminary in New York, returning immediately to Israel to fill the position of rabbi at Adat Shalom-Emanuel, the Masorti congregation in Rehovot of which he had previously been a member.

Before turning to the rabbinate, Rav Mikie (as he is known in Rehovot) worked chiefly in the nonprofit sector, including heading Masorti Israel's development department. He has volunteered at various organizations, including the Jerusalem Open House for Pride and Tolerance, where he served as board chairman from 2008-2010. Rav Mikie also worked abroad for the Foreign Ministry in the Public Diplomacy (Hasbarah) and Culture departments of various Israeli missions.

During his rabbinical studies, Rav Mikie interned at the New Israel Fund, New York Presbyterian Hospital, Town & Village Synagogue in New York's East Village, and at Congregation Beit Simchat Torah, the world's largest LGBTQ synagogue. In 2017, Mikie was elected to serve as the Israel region president of the Rabbinical Assembly (RA), placing him on the International RA's Executive Council and, since 2018, as an observer on its Administrative Committee. Rav Mikie also serves on the boards of the Masorti Movement in Israel and the Schechter Rabbinical Seminary in Jerusalem.

Rav Mikie works to facilitate his congregants' journeys to owning their Judaism. He is a staunch supporter of religious pluralism in Israel and works in the wider community to reconnect the disaffiliated to their Jewish tradition.

This program is free and open to the community. To keep quality, educational programming free of charge in the future, please consider making a donation or sponsoring an upcoming event by contacting Temple Israel Adult Education Chair Natan Brener at natanbrener@gmail.com or 407-435-8613. Sponsorship starts at $50. Thanks in advance for your generosity and support.