By Tamar Fox
My Jewish Learning

History of the Jews in Ireland 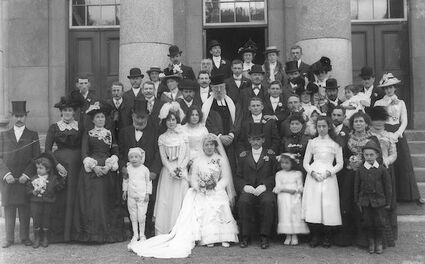 A Jewish wedding party outside Ireland's Waterford Courthouse in 1901.

Jews have made their home in Ireland for centuries, and many have risen to be successful and prominent figures in politics, business, and theology. Ireland produced Chaim Herzog, the sixth president of Israel, and Leopold Bloom - the hero of James Joyce's "Ulysses," a canonical Irish text - is a Jew. However, the Irish Jewish community can hardly be called thriving, and Jews have not always been welcomed in this predominantly Catholic country. During the Holocaust, Ireland denied refuge to Jews in search of escape from the Nazis, and antisemitism has been a minor but persistent problem.