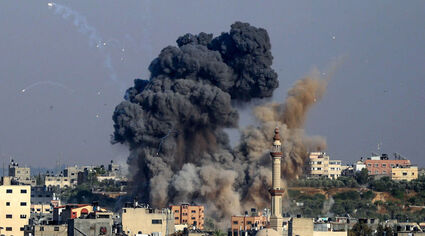 Smoke billows from Israeli air strikes in Gaza City, controlled by the Palestinian Hamas movement, on May 11, 2021.

(JTA) - For some Americans watching the escalating violence in Israel and Gaza in recent days, the most striking image from the conflict came in a video of Israeli men at the Western Wall, singing and dancing as they watched a fire burn outside the Al-Aqsa Mosque.

Others can't look away from videos of Iron Dome, Israel's missile defense system, which shoots rockets out of the air mid-flight, lighting up Israel's skies like a fireworks display.

Both images have gone viral as Israel and Gaza descend into the most intense exchange of rocket fire since 2014.

As in past conflicts between Israel...