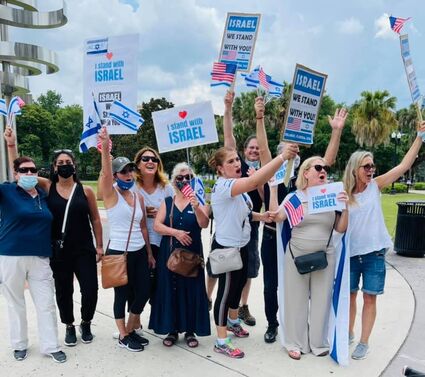 Members of the Jewish community showed their support for Israel at Lake Eola on Wednesday, May 12, as part of a coast-to-coast solidarity stand for Israel. Idit Lodringer, director of IAC in Orlando, is sixth from left.

(LOS ANGELES) - With Israel's citizens under massive Hamas and Islamic Jihad terrorist rocket attacks, the Israeli-American Council and other American Jewish groups organized rallies on May 12 across America in solidarity with Israel and its people. As the violence in Israel worsened, the IAC issued an "emergency call to action" to "Stand with Israel" and "stand up against terror."

In Orlando, Idit Lotringer, director of IAC Orlando, and Keith Dvorcik, CEO of the Jewish Federation, quickly organized a rally at Lake Eola. With less than 12-hours notice many residents joined Dvorchik and L...