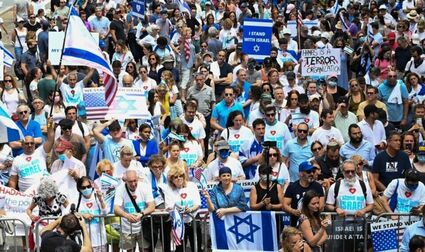 (Israel Hayom via JNS) - Thousands gathered on Sunday for a pro-Israel rally in New York in response to a series of antisemitic attacks on Israeli and Jewish American communities in the United States in the wake of Israel's "Operation Guardian of the Walls" in the Gaza Strip.

The demonstration, "United Against Antisemitism. United Against Terror. United for Us," took place at Ground Zero and in 14 other cities across the United States, among them Miami, Los Angeles, Orlando, Austin, Denver, Houston and more. It was organized by the Israeli-American Council together with 100 other Jewish com...