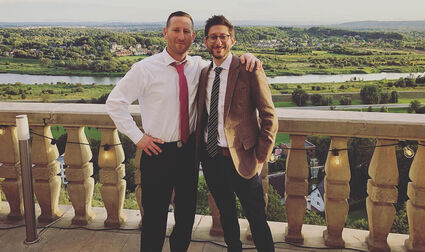 Danny Fenster (r) with his brother Bryan at a friend's wedding in Krakow, Poland, in September 2019. It was the last time they saw each other.

(Detroit Jewish News via JTA) - On his way home for a surprise visit to see family and friends, Jewish journalist Danny Fenster was detained Monday in Myanmar, where he works for a news site in the country's largest city of Yangon.

Fenster is among the many journalists who have been detained, imprisoned or expelled from the country since a military coup took control of its government in February.

The 37-year-old Detroit native was detained at Yangon International Airport shortly before boarding a flight to Kuala Lumpur and is being held in Insein Prison, which has a notorious and well-docum...