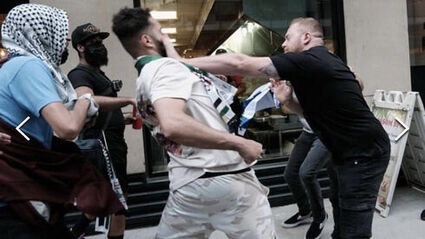 Snir Dayan and Amit Skornik defending themselves after being attacked by pro-Palestinian protesters in New York City, May 2021.

(JNS) - Snir Dayan and Amit Skornik were hoping for a quiet bagel breakfast last week on a typical day in New York City. But instead, a group of pro-Palestinian protestors tried to punch some holes in them close to 52nd Street and Third Avenue in Manhattan in front of Ess-a-Bagel. It was one of several recent attacks against Jews in New York City by Palestinians or Palestinian supporters, but this time, it turned out a bit differently. Dayan, 27, and Skornik, 26, were trained in Krav Maga, and both served in the Golani Brigade of the Israel Defense Forces.

"New York is the most diverse city...