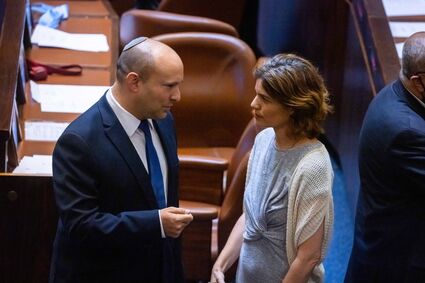 Naftali Bennett (l) and Tamar Zandberg in the Knesset, Israel's parliament, June 3, 2021. Both have received death threats because of their opposition to Benjamin Netanyahu.

(JTA) - In the days before Benjamin Netanyahu's rival lawmakers announced that they had formed a government to replace the longtime prime minister, one fled her home with her partner and baby after receiving what she called "severe threats" against their safety.

The threats to Tamar Zandberg of the left-wing Meretz party included a fake notice of her death that circulated on social media.

Zandberg wasn't the only Netanyahu opponent to receive death threats. So did Avigdor Lieberman and Naftali Bennett, former Netanyahu allies who have turned against him. In the face of the threats, leading...