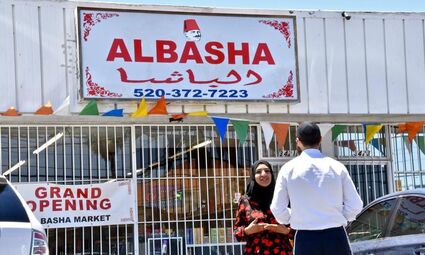 Ghufran Almusawi, proprietor of Al Basha Grocery in Tucson, Ariz., speaks with a Jewish customer. Her store sells both kosher and halal products in an effort to create a "melting pot" for Jews and Muslims.

(Jewish News of Greater Phoenix via JTA) - Tucked between a dance school and a '60s retro lounge on a quiet street in Tucson, Arizona, sits a small Middle Eastern and African foods store. But the Al Basha Grocery isn't just a place to get kosher meats and hard-to-find ingredients.

"It provides an opportunity for people to see each other as real people and have a normal interaction with people who ordinarily might not interact in their day-to-day lives," said Jesse Davis, a regular Al Basha shopper.