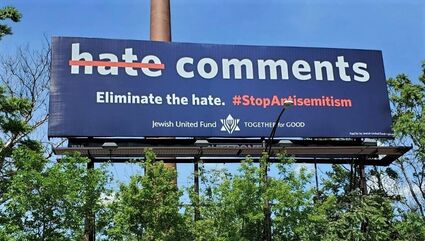 A billboard as part of the "Stop Antisemitism" media campaign in the Chicago area, sponsored by the Jewish United Fund, May 2021.

(JNS) - The Jewish United Fund is taking the fight over antisemitism to residents of Chicago and the surrounding suburbs with a major media blitz that included TV ads, billboards, social-media posts and more.

The "Stop Antisemitism" media campaign, which launched in late May, is being undertaken because of the rise of attacks on Jews and Jewish institutions across the country and in Western Europe. During Israel's conflict with Hamas in Gaza in mid-May, anti-Semitic attacks soared worldwide and continue to be reported on a daily basis.

"The purpose of this is to bring meaningful messaging t...