As Israeli swimmers took 4th place in an Olympic trial, a TV commentator criticized their country 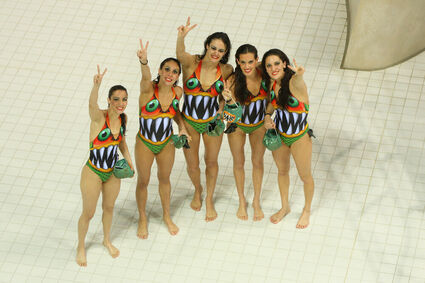 Clara Basiana, left, and other members of the Spanish national team compete at the London Olympics in the United Kingdom on April 21, 2012. As a commentator of the Israeli's performance, Basiana accused Israel of "genocide and violations of human rights."

(JTA) - Standing poolside in Barcelona, Eden Blecher and Shelly Bobritsky beamed with pride and satisfaction as they struggled to catch their breath.

The two athletes from Israel on Sunday had just clinched the fourth slot in the Women Duet category of the Artistic Swimming Qualification Tournament in that city in Spain, assuring their participation in the 2021 Olympics in Tokyo.

But the commentator who narrated the tournament for TV3, the state broadcaster of Catalonia, the separatist Spanish region whose capital is Barcelona, didn't focus on their technique or performance.