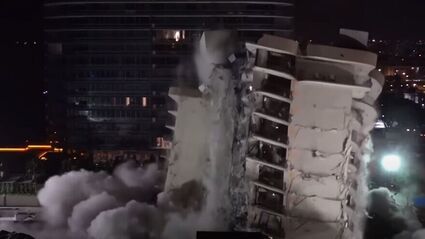 Demolition crews set off explosives to bring down the remaining portion of a collapsed condominium in Surfside, Fla., on July 4, 2021.

(JNS) - Controlled explosives on Sunday brought down the rest of the condominium in Surfside, Fla., that collapsed on June 24, leaving more than 140 people dead or missing.

The confirmed death toll rose to 24 on Saturday with 121 still missing at the site in the heavily Jewish area.

Miami-Dade County Mayor Daniella Levine Cava signed an emergency order to bring down the building due to the approach of Tropical Storm Elsa, which is expected to hit the Florida coast on Tuesday. Officials feared the unstable remnant of Champlain Towers South wouldn't be able to withstand the buffeting of the...