By Ben Harris and Shira Hanau

These are the Jewish victims of the Surfside building collapse 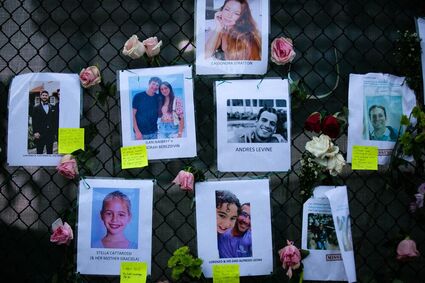 Images of Andres Levine, Ilan Naibryf and Deborah Berezdivin, three of the Jewish victims of the Surfside building collapse, in center among other photographs of those missing posted at a makeshift memorial on the building site in Surfside, Fla., June 26, 2021.

This article will be updated as more names are identified by authorities in Florida.

(JTA) - The Champlain Towers South building collapse is a national tragedy, one that has claimed nearly 20 lives so far and left over 140 still missing in the rubble as of Thursday.

Among other groups, it struck a unique nexus of the American Jewish community in South Florida, home to a mix of Latin American immigrants, Israelis and retirees from the Northeast. The town of Surfside, the site of the collapse, is at least a third Jewish, with a large Orthodox population.

Several of the victims identified were...