Boston Jews rally together after streak of attacks in the area 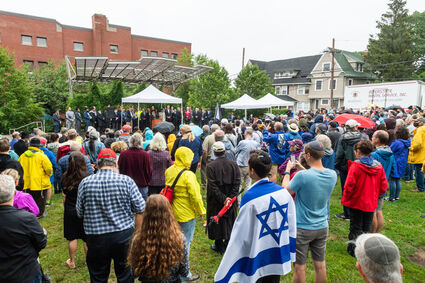 Hundreds gather on July 2, 2021, for a rally in Brighton, Mass., in support of Rabbi Shlomo Noginski, who was stabbed the day before in the same park across the street from his Jewish day school.

BOSTON (JTA) - Days after a series of violent acts stunned Greater Boston and threatened its Jewish community, residents are jolted but resolute, vowing to continue taking pride in their Jewish identity.

The latest incident occurred on Thursday, when Chabad Rabbi Shlomo Noginski was stabbed eight times outside of Shaloh House, a Jewish school and synagogue in Brighton, where he teaches.

Less than a week prior, on June 26, in Winthrop, a seaside town just north of Boston, a white supremacist who harbored virulent racist and antisemitic views murdered Air Force veteran Ramona Cooper, 60...