A local resident's perspective on the NO FEAR Rally Against Antisemitism 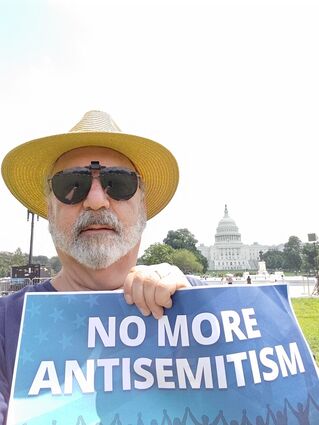 Neal Blaher takes a selfie at the NO FEAR rally.

An email appeared in my Inbox on Thursday, July 8, from The Jewish Agency for Israel. The message informed me that a rally was planned for that coming Sunday, July 11, on the grounds facing the U.S. Capitol in Washington, D.C. Titled "No Fear," the event was promoted as a statement of solidarity among a broad array of Jewish organizations, representing different views along the political spectrum, all seeking to present a strong, unified protest against antisemitism.

I stared at the message on my computer screen for a few minutes, looked at my calendar for the coming weekend, and then listened to a small voice inside telling me that I should hop in my car and drive up to participate. Forty-eight hours later, I was halfway to Virginia.

The day of the rally was hot and sunny. But the positive energy generated by those in attendance provided the stamina we needed to endure the heat during the 2-hour program.

The organizers of the event are to be highly commended for what they put together in just a few short days. Among the speakers were notable and charismatic leaders and activists from several religious and political organizations; former members of antisemitic groups who at some point in their lives saw the deception within their communities and became active supporters of the Jewish people and the State of Israel; and, perhaps the most compelling, several victims of very recent, nationally and internationally-reported violent and hateful attacks here in the United States who survived their attackers' assaults and were able to tell their stories.

The Leaders and Activists

The rally began with three strong and politically active women. First to speak was Noa Tishby, an actress, activist and author of "Israel: A Simple Guide to the Most Misunderstood Country on Earth." Tishby recalled that previous generations of her family were not "hated, discriminated against, or persecuted because of the actions of the State of Israel. ... Back then there was no Jewish state to blame." However, because being openly antisemitic today is considered unacceptable, the old hate is expressed under the guise of verbal attacks against the Jewish state. "So much of the antisemitism of today simply attributes all the evil tropes, lies and libel that have been used for centuries to justify the worst horrors against Jewish people to the Jewish state."

Thunderous applause followed when Tishby added: "When ignorant crowds and some ignorant super models on Instagram hatefully and irresponsibly spread these lies about Zionism; when they chant 'from the river to the sea Palestine will be free'; when they engage in the modern-day libel of blaming Israel as a genocidal state, they shouldn't be surprised when that demonization results in Jews being attacked on the streets of this beloved country, and it has to stop!"

Tishby was followed by Meghan McCain, a writer and television host best known as the daughter of the late Senator John McCain. Although not Jewish, she proclaimed, "I am Meghan McCain, and I am a Zionist." Her current concern was seeing long-time friends and acquaintances express a kind of fear she had never seen before. In response to that fear, McCain told us to "[b]e proud Zionists. Be proud Jews. Be proud supporters. Be proud allies. We will not go quietly."

The final speaker of the opening women's triumvirate was Alma Hernandez, a state representative from Arizona (interestingly the same state where John McCain had served as U.S. Senator). Representative Hernandez, who co-sponsored a bi-partisan bill mandating Holocaust Education, which just that week had been signed into law, told the crowd: "I am Mexican. I am Jewish. And I am damn proud to be a Zionist." She added: "In our community, antisemitism gets underreported, and enough is enough." Particularly enlightening was Hernandez's observation, based on her experience in the state legislature, that antisemitism comes from both sides of the political aisle.

Although Representative Hernandez correctly observed that antisemitism emanates from members of both of the major political parties, the rally demonstrated that powerful vocal support can be found there as well. At one point, the podium was occupied by the chairs of the Republican Jewish Coalition and of the Jewish Democratic Council of America.

One of the most moving moments of the day was when Joshua Washington, executive director of the Institute for Black Solidarity with Israel, was joined at the podium by Rabbi Menachem Creditor, UJA Federation of New York's Scholar-in-Residence. Both men led the crowd together in the singing of "Gesher Tsar Me'od" (The world is a narrow bridge, but never be afraid to cross it, even when there is reason to be), in perfect Hebrew and in perfect harmony.

Also moving were the words of Reverend Jimmie Hawkins, director of Public Witness and UN Advocacy for the Presbyterian Church, USA. After reciting the Shema and part of the V'ahavta in English, Reverend Hawkins listed some of his reasons for attending the rally: because Jewish advocates made up 50 percent of the young people who participated in the 1964 Freedom Summer, which sought to register and thus increase the number of Black voters in Mississippi; because Jewish leaders, including Rabbi Abraham Joshua Heschel, were among those arrested with Martin Luther King in 1965 during the March on Selma; and because The Voting Rights Act and Civil Rights Act of 1964 were drafted in a conference room of the Religious Action Center of Reform Judaism "right here in Washington, D.C."

Echoing the rally's message as most of the other speakers had done, Fischer concluded: "This is a 'No Fear' Rally. You are to wear your yalmukas, wear your tzitzis, wear your hamsehs. ... Am Yisrael Chai!"

As moving as the religious and political leaders' messages were, nothing caught the attention of the crowd more than those who personally had survived very recent hate crimes.

Still weak and in pain from the life-threatening injuries received only 10 days earlier, Rabbi Shlomo Noginski from Boston ascended the podium. He was standing outside of his Jewish Day School when a stranger approached, pulled out a gun, and acted as if he was planning to kidnap the rabbi. Seconds later, however, the attacker apparently changed his mind, pulled out a knife, and stabbed Rabbi Noginski eight times. Aware of the 100 children inside the school, he did everything he could to keep the assailant away from it. Despite this experience, Rabbi Noginski told us how the love, support and prayers he had received from Jews and non-Jews alike from all over the world helped him discover that the best weapon against antisemitism is to stand up with pride and express love for others.

Talia Raab, a 17-year-old high school student from suburban Chicago, organized a local Walk for Israel. Between the time she began her planning until the day of the rally, she received over 1,000 antisemitic remarks and death threats. She quoted some of them, including "I am going to rape the Jewish out of you"; "I wish you were the one that was hit by that rocket"; "Keep walking till you reach hell ... That's where you animals belong anyway."

Despite the fear that these messages created for this 17-year-old, she proceeded with the rally. When it was over, Talia and her siblings and friends were surrounded and attacked, their Israeli flags burned, and their cars wrecked, all amidst shouts of "Kill the Jews." But Talia's courage was inspiring. She told us that she refuses to be silenced by these thugs, and would not be afraid like her grandparents and aunts and uncles were during the Holocaust when they marched to their deaths. "Their voices will forever ring out through me and all of you here."

Matthew Haverim, an Iranian Jew whose parents emigrated from Iran to escape antisemitism, was seated in a restaurant in Los Angeles with three of his friends when a gang of 15 pro-Palestinians surrounded them and demanded to know if Haverim was Jewish and a supporter of Israel. Instinctively, Haverim told the truth, saying "yes" on both counts. The gang attacked him and his friends, who sustained injuries but somehow managed to escape with their lives.

The final speaker among the group of surviving victims was Rabbi Jeffrey Myers from the Tree of Life Synagogue in Pittsburgh, the scene of the horrific shooting during Shabbat morning services on Oct. 27, 2018. Rabbi Myers argued that being antisemitic constituted a rejection of the United States Declaration of Independence, which provides for "equal, unalienable rights including life, liberty and the pursuit of happiness." Antisemites therefore must choose whether they are going to comply with this pact and be American or disregard their Declaration of Independence and be un-American.

Of particular interest was the presence of former members of communities that spew hate against Jews.

Derek Black grew up with white nationalists and spent the first 20 years of his life supporting their ideologies. According to Black, his path never would have changed had it not been for "an invitation to a Shabbat dinner." At the core of white nationalism, he explained, is antisemitism. But antisemitism is not rooted in hate. Rather, it comes from fear. Black is now an active supporter and speaker for the Jewish people.

Hussein Aboubakr is an Egyptian educator with Stand With Us and Project director for the Endowment for Middle East Truth. Like Black, Aboubakr grew up among ill-will toward Jews. When he questioned that attitude during his youth in Egypt, he was shunned and considered a traitor, and eventually left the country. The truth he discovered upon leaving Egypt ultimately led him to his current role of trying to spread that truth.

Perhaps the most interesting comment Hussein made was that the mainstream media in the United States - and he emphasized that he was not exaggerating - reminds him of the distortions he saw on Al Jazeera as a child growing up in Egypt.

Although not on the program, I was extremely pleased to see Deputy Minister Benjamin Krasna from the State of Israel take the podium to say a few words.

Despite the haste with which it was put together, the No Fear Rally was very well organized. Perhaps the most remarkable achievement given current attitudes, reportedly the result of the efforts made by Elisha Wiesel, son of the late Nobel Laureate Elie Wiesel, was the involvement, both as speakers and as sponsors, of voices from many points along the political and ideological spectra. This was evident from, among other things, certain variations in the content of the speeches reflecting the differing points of view.

A slight majority of speakers emphasized the demonization of the State of Israel and attacks on the country's right to exist as mere covers for underlying antisemitism. Others spoke to the legitimacy of raising questions about government policies in Israel, though also making clear that such disagreements did not justify attacks on Jews in the U.S. or anywhere else in the world.

The result of this parade of varying views appearing on a single stage was a gathering of people with a unified front and mission. Another effect was facilitating greater understanding among Jews and their non-Jewish supporters. To make sure these achievements did not end with the rally, Marie Fischer from the Maryland Republican Jewish Council had all of us text "NOFEAR" to 52886 to receive a link to instructions for taking action going forward. After reading my story, I hope you readers will do so also.