By Times of Israel staff and agencies 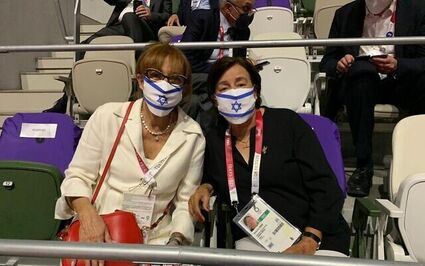 Ankie Spitzer and Ilana Romano, widows of Andre Spitzer and Yoseff Romano, who were murdered in the 1972 Munich massacre, take part in the Tokyo 2020 Olympics opening ceremony, July 23, 2021, at which a moment of silence was held for Israel's 1972 Olympic massacre victims.

Forty-nine years after the 1972 massacre of Israeli athletes at the Munich Olympics, Friday's opening ceremony for the Tokyo 2020 Olympics included, for the first time, an official commemoration of those who died in the terror attack.

Tributes were paid to those lost during the pandemic and throughout Olympic history. The Israeli delegation that was killed at the Munich Games was specifically mentioned. A moment of silence was offered inside the stadium, alongside a dance performance honoring the dead.

"In particular we remember those who lost their lives during the Olympic games," the anno...