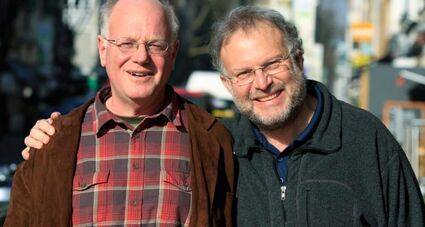 Ben Cohen and Jerry Greenfield, the American Jewish businessmen who founded Ben & Jerry's Homemade Holdings in 1978, said in a New York Times guest essay on Wednesday that they "unequivocally support" the company's decision last week to no longer sell its ice cream in Judea and Samaria.

"We unequivocally support the decision of the company to end business in the 'occupied territories,' which a majority of the international community, including the United Nations, has deemed an illegal occupation," Cohen and Greenfield said in the essay, titled, "We're Ben and Jerry. Men of ice cream, men of principle."

The two men, who identified themselves as "proud Jews" and "supporters of the State of Israel," said they are also "proud" of the company's action and "believe it is on the right side of history."

"In our view, ending the sales of ice cream in the 'occupied territories' is one of the most important decisions the company has made in its 43-year history," said Cohen and Greenfield, who no longer have operational control of Ben & Jerry's after signing an acquisition agreement with Unilever in 2000.

""We have a longstanding partnership with our licensee, who manufactures Ben & Jerry's ice cream in Israel and distributes it in the region. We have been working to change this, and so we have informed our licensee that we will not renew the license agreement when it expires at the end of next year," the statement said.

Avi Zinger, the "licensee" and CEO of Ben & Jerry's Israel, told i24 News, "I was asked by the company to stop distributing ice cream to the West Bank [Judea and Samaria] and east Jerusalem. I refused."

Zinger's refusal to boycott his fellow citizens had consequences. "I got a letter from the CEO of Ben & Jerry's saying that they are not going to renew my license at the end of 2022," he said.

"It was especially brave of the company. Even though it undoubtedly knew that the response would be swift and powerful, Ben & Jerry's took the step to align its business and operations with its progressive values," they said.

Cohen and Greenfield insisted that their support for boycotting Israeli citizens in Judea and Samaria is "not a contradiction nor is it anti-Semitic."

"In fact, we believe this act can and should be seen as advancing the concepts of justice and human rights, core tenets of Judaism," they said.

The Ben & Jerry's co-founders said that the company's decision did not constitute a boycott of Israel but only of territory "outside Israel's democratic borders."

In a statement on July 19, Ben & Jerry's said, "We believe it is inconsistent with our values for Ben & Jerry's ice cream to be sold in the 'Occupied Palestinian Territory.'"

The 'right side of history'?

The author of this article, Josh Plank of World Israel News, stated, "the so-called 'occupied Palestinian territory,' composed of the biblical heartland of Judea and Samaria, was in fact never part of Palestine, a country which never existed. Jordan invaded and occupied the territory in 1948, and the land was later captured by Israel in 1967 after Jordan attacked the Jewish State.