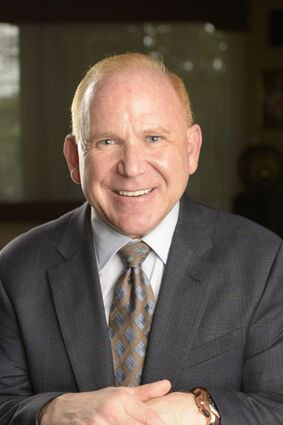 The selection of Bruce Gould as this year's recipient of the Heritage Human Service Award was a long time coming. One might ask why he had not been selected earlier. Well, he'd never been nominated. Perhaps everyone thought someone else would nominate him because his family's generous donations and endowments surpassed many other generous givers. One of those "other generous givers," Alan Ginsburg, who has had "the pleasure of knowing Bruce for 20+ years both socially and community-wise," said of him, "his passion for Jewish causes is unparalleled. He is extremely generous and philanthropic and does so not only in the community. He has often single-handedly made a difference in causes."

When Rhonda Forest, secretary of the Jewish Federation of Greater Orlando, nominated him - stating, "Bruce is one of the most philanthropic people I know. His love of the causes he supports is so much more important to him than the dollars he donates. Bruce's time and heart belongs to his family and friends" - the selection committee knew without a doubt (even though there were several other significant nominations) that Bruce Gould was the person who best fit Heritage's criteria for human service.

One would not suspect this man, dressed in a sports shirt and khaki pants (as he was for the interview), has done so much to improve the world. He is a very approachable, engaging, and humble man.

"He's a people guy," said Dr. Michael Friedman, a friend for several years. "It's always like he is running for office: always says hello to everyone. He doesn't flaunt his wealth."

Gould is private about his (and his family's) gift giving. "He doesn't want the spotlight. He is a behind-the-scenes guy, a tremendous asset to Jewish causes worldwide," said Ginsburg.

He is also very fit. Friedman said he is the "fittest 61-year-old I know." They met at RDV Sportsplex and have worked out together ever since. "We even worked out during Covid in my daughter's garage when RDV shut down."

Gould loves long-distance bike riding, but as with most of his endeavors, bike riding is not just about himself staying fit. He has done bike rides in Israel and New Zealand to raise money and awareness for Israel. One cause dear to his heart is the American Diabetes Association. His father had diabetes, he said, and when he was younger he contracted a virus that required mass quantities of steroids. As a result, his pancreas shut down. He walked into a hospital with an AIC level of 15 (normal is under 5.7), and blood sugar levels at over 900. The doctors and nurses were amazed he could walk. It took eight days to get him regulated and five months to recover. Long-distance bike riding became an instrument to raise millions of dollars locally for research and support to find a cure for diabetes and educate people about the dangers of diabetes through the America Diabetes Association's Tour de Cure.

He is getting back into biking regiment. Biking-buddy Michael Friedman said, "We bike ride together about once or twice a week, about 30-60 miles. Now that we are older, it takes longer!"

Gould's family is very close-knit. In 1953, Gould's parents, Norman and Jean Gould, started the family-owned publishing business Gould Publications in upstate New York, specializing in law books and treaties for the legal and law enforcements communities in the country. They moved to Longwood, Fla., in 1993. Gould Publishing was the leading (and largest) publisher of statutory and criminal justice pamphlets in the country. They sold the company in 2004 to LexisNexis, the largest legal publisher in the country.

Gould and one of his brothers, Jeffrey, worked in the family business after school and on weekends. His other brother, Robert, was not involved in the business.

When the family moved to the Orlando area, Gould became fast friends with Jason Schrader, Jason Toll, Jason Chepenik and Mike Poteshman. While Chepenik and Toll grew up here, the others arrived in Orlando about the same time as Gould. They met through Projenet (Professional Jewish Networking, sponsored by the Heritage and the JCC) in 1993-1994. It was Gould's first real exposure to the Jewish community. He loved the community, especially the Jewish Community Center, of which he later became vice president of the board of directors, and a long-time board member. "The Jewish Community Center provides vital services to children at a young age. The education and learning experience these children of all religious persuasions receive is invaluable and lasts a lifetime," he shared when he was honored at a JBall.

"It quickly became evident that Bruce was a leading, if the not the leading, singular force promoting Zionism and the State of Israel in Central Florida," Diamond said. "Be it Jewish National Fund, AIPAC, or a host of other pro-Israel endeavors, Bruce was (and remains) at the forefront of fundraising and thoughtful political activism."

Gould attended New York University where he received his bachelor's degree in 1981, his juris doctor from Touro College Fuchsberg Law Center in 1984, and his Master's of Legal Letters from NYU in 1993. Because his dad Norman was a lawyer, Bruce said jokingly that being a lawyer was a "family business in itself."

In 1996, Gould took his first trip to Israel on a Future Leadership Mission. He fell in love with Israel and has been back more than 35 times. He has a lot to say about the Land and its history. His love for Israel flows out through his words. "I think that what Israel is doing is amazing. They've built a great country in 75 years. After the 1967 war Israel was no longer the victim. They became the aggressor – a super power."

Jim Shapiro knows Gould's passion for Israel and Jewish education. "Valeria and I have known Bruce for 15 plus years and travelled three times with him to Israel," he said. "He is extremely generous with his time and treasure, dedicating himself to multiple causes locally, nationally and internationally."

A few years ago, when Gould was JNF-USA president-elect (he served one year as president), he and his parents endowed the lead gift to build a memorial hall and an amphitheater at Ammunition Hill in honor of the 182 soldiers who lost their lives during the Six Day War.

He spoke briefly of the Palestinians. "The Palestinians are victims but not of Israel - [of] their own people and own leadership, and that's the problem. But you can never get that story out."

Reflecting, Gould said, "If you had to go back and look at history again, I don't think there's ever been a war where one side wins and the other side loses and the people are still living in refugee camps. I feel bad for them. They were displaced out their homes. But Jews were displaced out of their homes in all the other countries and no one ever said anything.

This past year, he has been helping tell the story of Israel through the film "Upheavel: The Journey of Menachem Begin," which he produced. "This movie brings together my interest in Israel and my understanding of the Holocaust. Every decision Begin made was viewed through the prism of the six million lives lost in the Holocaust ...," Gould told Judith Fleischer, writer for JNS, The Jewish Voice, Jewish Ledger and Intermountain Jewish News. "[Begin] lived the Holocaust and understood that the only way we can prevent it from happening again is the State of Israel. We need to tell his story."

In addition to having served on the Holocaust Memorial Resource and Education Center Board, Gould is currently chairing the Capital Campaign for the new Holocaust Museum of Hope and Humanity.

Gould's first endowment was just after he graduated from Touro College. His face lit up as he recalled how it came about. He was speaking with Steve Israel, who was a long-term congressman from Long Island.

"I want to make a donation and I'm just starting out and I want to do something that has to do with books and a library," he told Israel.

Israel spoke with the law school dean who thought it would be nice to have a book award. It would be a book in the legal field, something to do with the law, and authors would come to the school, speak, have book signings, etc.

"What should it be called?" asked Gould. The answer: The Bruce K. Gould Book Award. The Dean then gave Gould a bit of advice: "Put your name on it because when you aren't around 20 years from now, people will still know who had the impetus to do this."

Honorees have included John Grisham, former ambassador Michael Oren, The Honorable Sandra Day O'Connor, The Honorable Sonya Sotomayor, and Bret Stephens to name only a few of the 27-so-far recipients. 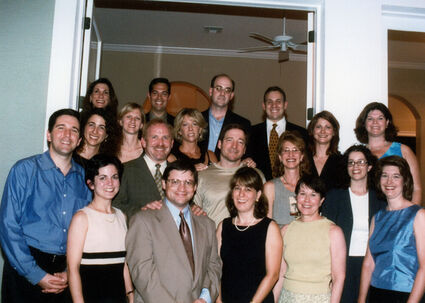 The fourth Jerome J. Bornstein class. Bruce Gould is in the 2nd row with his hands on the shoulders of Norberto Katz. David Diamond is directly behind Gould.

Gould's endowments, donations and fundraising have gone the gambit from the prestigious Touro Law School's Book Award to nursing scholarships, the JCC poker tournaments, and most recently, the Orlando Torah Academy's Library (please see article on page 2). Every gift is equally important to him and his family. Gould has stayed true to his passion for the ongoing of Jewish education, and he and his family have made giving a family affair. They gave the lead gift for the Gould Law Library at the law center and the first endowed faculty chair. His family have always understood the importance of supporting education and have established numerous scholarships, endowed chairs and named libraries at the University of Central Florida, Touro Law Center, New York University, Seminole State College, Adventist University School of Health Sciences and Valencia Community College.

The final word goes to Alan Ginsburg, "this award is well deserved and well placed."

The Human Service Award will be presented to Bruce Gould by Rhonda Forest via Zoom at the Jewish Federation Annual meeting, Aug. 26 at 7 p.m.