Jewish History in Film: Fragmented memories of war in 'Waltz with Bashir' 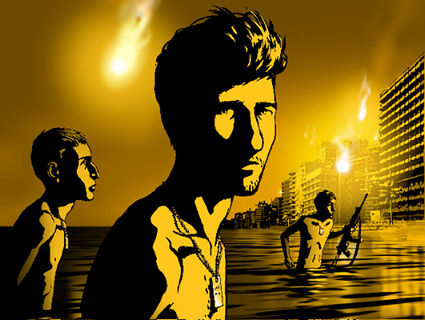 An animated scene from "Waltz with Bashir."

In an interview with David Poland for "DP/30: The Oral History of Hollywood," director Ari Folman expressed that the reactions he received in Israel toward his 2008 adult animated film, "Waltz with Bashir," were the most shocking out of every country he visited. He expected to be accused of being anti-Zionist and his film being written off as just a pile of liberal propaganda. Little did he expect the overwhelming praise from audiences and critics alike. And no one could blame him for his shock, the Sabra and Shatila massacre has long been a sensitive topic in Israeli, Palestinian, and Lebanese circles - the blame for the massacre being split between the Lebanese right-wing Christian Kataeb party (also known as the Phalanges), who carried out the massacre in 1982, a radical response to the assassination of Bashir Gemayel, and the Israeli military for not doing anything to stop it. Regardless of the details of Israel's complicity to the massacre and the Phalanges' revenge rampage, one fact remains: Anywhere between 460 and 3,500 Palestinian refugees and Lebanese Shiites were murdered in cold blood.

The film opens with an image: a deranged pack (26, to be exact) of dogs run rampant through the streets of Beirut, their attention drawn to a man in a window - an animated Boaz Rein, a friend of the writer/director. The dogs have come to kill him. They tell his boss, "Give us Boaz, or we'll eat your customers. In one minute!" It is here where the dream ends. Boaz has had this dream for two and a half years, who they are or why they are after him remains unsaid in the dream, but he knows. Back in the IDF, when his division was sent to retrieve Palestinian fugitives in Lebanese villages, it was his job to kill the dogs that would bark and wake up the village. His fellow soldiers knew he couldn't kill a person, so they put him on dog duty. He killed 26 of them and he remembers every face, every expression as they died.

Folman admits to his friend that he has not had a single flashback or dream of his time in Beirut - he was around 200 to 300 yards away from where the massacre took place. That very night, in the winter of 2006, Folman has the first flashback of his time in Beirut. A young man of 19, he emerges from the ocean, flares coming down onto the city in front of him, along with a group of other young men, wearing nothing but the weapons at their sides.

Why Boaz's dream? Why was that what jogged Folman's memory in over 20 years?

"Memories are dynamic, they're alive. If some details are missing ... memory fills the holes with things that never happened."

Is this memory real or is he just filling in the blanks? This question sets Folman on a quest to remember, truly remember, what happened and his involvement in the massacre. He visits various friends of his who also fought in the Lebanon War, with the hope that they will help piece together his fragmented mind.

All the elements of a typical documentary are here, with Folman's subjects front and center. What he does differently is how he constructs the hallucinations and memories, the past and present, using animation. Aided by Max Richter's beautifully haunted score, reality mixes with fantasy as their stories unravel and the truth of Folman's role in the massacre is revealed.

In a moment where Shmuel Frenkel runs in the middle of the street, bullets raining down on top of him, posters of the newly assassinated Bashir Gemayal all around him, he shoots his gun anywhere he can, dancing to the tune of Chopin's Waltz in C-Sharp minor. This scene gives some of the finest moments in war cinema a run for their money - it is this particular waltz that gives the film its title.

Ari Folman is himself the son of Holocaust survivors, Auschwitz survivors to be exact. It is difficult seeing him confront his own participation in a massacre and the guilt and responsibility he feels toward it.

"You can't remember the massacre because in your opinion, the murderers and those in the outer circles are one in the same. You feel guilty because at 19, you unwillingly took the role of a Nazi. But to keep you sane you must keep in mind that you were firing flares, not massacring people."

There is an interesting aspect of this film where a commentary arises on how we see war as an audience. As we know, Folman does not remember even being in the war due to him disassociating during that time. A psychologist tells him the story of a photographer who had gone to war and saw horrible images. He avoided confronting the images by telling himself, essentially, that he was outside of it and simply viewing it through the lens of his camera. As far as he was concerned, he was on vacation in Lebanon. At one point, his camera breaks and he is forced to confront the full reality of the situation. As an audience to this film, we can say the same. All we see are animated interpretations of the documentary's subjects and their experiences. At the end of this film, in a stunning sequence, our camera breaks, and we are forced to confront the actual images of the massacre.

"Waltz with Bashir" was the first feature-length Israeli animated film to be released theatrically since the stop-motion film "Joseph the Dreamer," released in 1962. "Waltz with Bashir" is an essential film, not just because of its historical relevance in understanding the Sabra and Shatila massacre or its unique exercise in animation, but as a first-hand look into the deception of memory and our responsibilities toward each other. Sometimes it is the actions we don't take that are the greatest crimes we could commit.

"Waltz with Bashir" is currently streaming on The Criterion Channel.

Ari Folman's next film, the animated "Where is Anne Frank," just premiered at Cannes last month and we can expect a release later this year in the U.S.

Zachary Aborizk is an independent filmmaker and writer based out of Orlando, FL. His work has appeared in such publications as Adelaide Magazine in New York as well as the Tampa Bay Underground Film Festival.