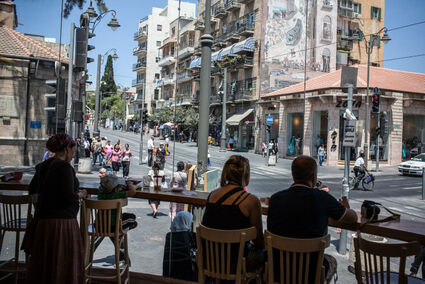 Israelis sit inside a cafe of what used to be pizzeria Sbarro in downtown Jerusalem where a suicide bombing attack occurred on Aug. 9, 2001, 11 years ago to the day.

(JNS) - Twenty years ago, a suicide bomber blew himself up in the Sbarro restaurant at the corner of King George Street and Jaffa Road in the center of Jerusalem. Fifteen people were murdered, including seven children, and 130 people injured. Dozens of families were destroyed in the blast.

The survivors have moved on, each in their own way, one day at a time. The nails and bolts packed into the bomb to increase its destructive properties have been removed with multiple surgeries over the years. Scars from the skin damaged in intense heat have healed under expert medical care.