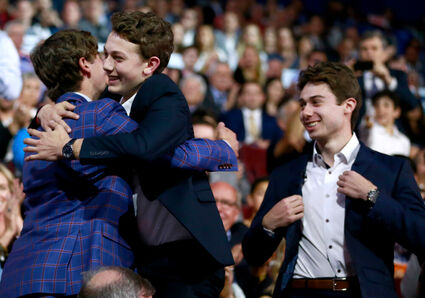 Jack Hughes, left, hugs brother Luke while their other brother Quinn looks on during the first round of the 2019 NHL Draft in Vancouver, Canada. Jack was the draft's first overall pick by the New Jersey Devils.

(JTA) - Talk about goals: Luke Hughes has become the third brother in his hockey-playing Jewish family to be drafted in the first round of the NHL Draft.

The New Jersey Devils picked the 17-year-old defenseman fourth overall in Friday's selections, making the Hughes brothers of Orlando, Florida, the first American family to have three siblings drafted in the National Hockey League's first round.

Jack, a center, was chosen first overall by the Devils in 2019 - earning the distinction as the first Jewish player ever taken No. 1. A year earlier, oldest brother Quinn had gone to the Vancouver C...