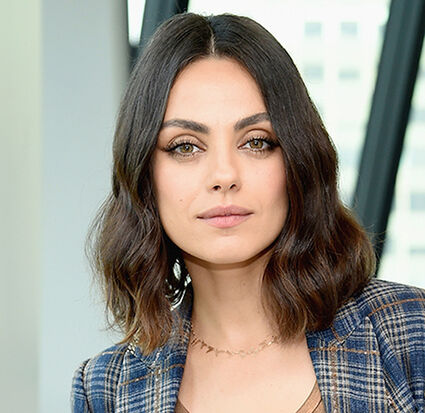 Did you know that Golden Globe, Prime Time Emmy and an Academy Award... all for best actress, were earned by fabulous actress HELEN HUNT? Did you also know that her paternal grandparents were from German-Jewish folks. Like me, Helen grew up in New York City from the age of three.

I recently saw her on television discussing her career. (You may have also.)

And you probably have heard of actress, Milena Markovna Kunis. NO? (How about MILA KUNIS?)

Mila, born in Soviet Ukraine (like my ancesters on my mom's side), and fled with her Jewish family to the United States when she was only 7 years old. Her grandparents were Holocaust survivors.

Mila comes from a Jewish family and has cited anti-Semitism as one of the reasons for her family's move to the U.S. Her parents raised her Jewish, even though religion was suppressed in the Soviet Union. She spoke only Russian when she arrived.

Another surprise to me was actor JAKE GYLLENHAAL, who happens to be the younger brother of actress MAGGIE GYLLENHAAL.

Jake's mother was Jewish. She was born in New York City to a Jewish family from Russia and Poland. Jake says that he considers himself Jewish and was even given a bar mitzvah at age 13.

I recently received this in the mail from "Stand With Us":

"An indigenous people developed a thriving civilization and culture in their ancestral homeland.

Over time they were conquered by a series of aggressive foreign empires, and while some remained in their cities and communities, most of them scattered across Europe and the Middle East.

Although they flourished at times, for 1.900 years the Jews lived as an oppressed minority, suffering expulsions, massacres, and ultimately genocide. They barely surprised but never lost hope. They overcame.

Over time and much suffering, they started a liberation movement, returned home to join those already there, and built one of the most vibrant, diverse nations the world has ever seen.

That nation is Israel, the Jewish homeland!

(I've been to Israel and of course, I intend to go again! How proud I am!)

Recently, the Jewish community of Ukraine was shaken by a Synagogue attack. (I read about it in the World Jewish Congress (WJC) and pass it along to you:

"The Jewish confederation of Ukraine voiced outrage following an attack on the Mariupol Synagogue by an axe-wielding vandal on the eve of Tisha B'Av,one of the calendar's holiest days which marks the destruction of the Temple in Jerusalem. The synagogue's security guard successfully fought off the armed attacker.

A wish from the Jewish Federation of Greater Orlando...

"We want to wish you and your family a healthy and happy New Year.

May this upcoming year bring joy, togetherness, and lots of laughter. Warmest wishes, your JFGO family.

The exact same wishes came from the Roth Family JCC to all of us!

(After more than a year and a half of pandemic we just suffered, we sure do need such wishes! Thank you, thank you.)

And speaking of fun and laughter, a reminder that "The Book of Merman" will still be presented through October 17th.

I got in trouble for saying publicly that "I love dogs better than people." (But I do!)

Anyway, I received this in the mail recently and want to pass it along to you. It is from the Animal League of America:

"From death row to a responsible, loving home... their journey begins with you. Over 8 million dogs and cats will end up in U.S. shelters this year. An estimated 2 million will meet a tragic end if they're not rescued in time."

(Reminds me of the Holocaust!)

Please contact them to see how you can help.

My son ate my dinner! (Oh wait. That's NOT funny!)

"Two men sitting on a train are talking. One guy says, 'Did you hear the one about the two Jews who are walking down the street...' The other guys says, 'Hold it! Why are you always telling jokes about Jews? I find it offensive. Why must they always be about Jews?'

'You're right,' his friend replies, and starts the joke again.

'So these two Chinamen are walking down the street on the way to their nephew's bar mitzvah...'"