What happened to all the art that Nazis looted? This Jewish Museum exhibit tells the story of several masterworks 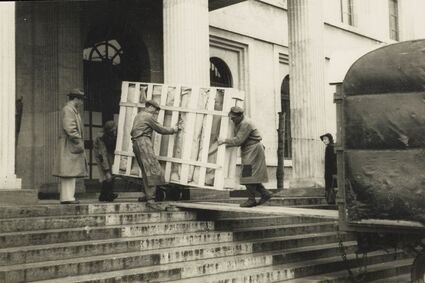 Great works of art often become so present in our everyday lives - the "Mona Lisa" on a mug, "The Starry Night" on a sweater, Basquiat in Beyoncé and Jay-Z's Tiffany campaign - that it's easy to forget how fragile the originals are. These images that populate our collective consciousness all started as a single destructible canvas. But most museums don't highlight the life these artworks have had as physical objects - often because that history is wrapped up in colonialism and theft.

At the new Jewish Museum exhibition "Afterlives: Recovering the Lost Stories of Looted Art," which opened last month in New York, this overlooked aspect of a painting's history becomes the focus.

"It is often difficult to understand the 'biography' of an artwork simply by looking at it, and even more difficult to uncover the lives and experiences of the people behind it," reads the text on the first wall visitors encounter, displayed beside Franz Marc's "The Large Blue Horses."

The gallery is organized around how the artwork it features - including works by Chagall and Pissarro (both Jewish), Matisse, Picasso, Bonnard, Klee and more - came to hang there. All the pieces displayed have one quality in common: They were either directly affected or inspired by the looting and destruction of the Nazis.

"The vast and systemic pillaging of artworks during World War II, and the eventual rescue and return of many, is one of the most dramatic stories of twentieth-century art... Artworks that withstood the immense tragedy of the war survived against extraordinary odds," the text continues. "Many exist today as a result of great personal risk and ingenuity."

One of the most striking instances of bravery the exhibit recounts is that of Rose Valland, a curator at the Jeu de Paume, which housed the work of the Impressionists. During the collaborationist Vichy regime, the Einsatzstab Reichsleiter Rosenberg, or ERR, took over the museum building. The ERR, "one of the largest Nazi art-looting task forces operating throughout occupied Europe," used the space to store masterpieces it had taken.

Valland, who had worked at the Jeu de Paume before the war, stayed on during the Occupation and collaborated with the French Resistance to track what the Nazis did with the stolen paintings. "At great personal risk," including sneaking into the Nazi office at night to photograph important documents, "she recorded incoming and outgoing shipments and made detailed maps of the extensive network of Nazi transportation and storage facilities." Pieces by Jewish or modernist artists were often labeled "degenerate" and slated for destruction. Valland was unable to save many of them, and referred to the room where they were housed as the "Room of the Martyrs."

In the exhibit, Valland's story is overlaid on a 1942 photograph of this room. Some of the works in it - by Andre Dérain and Claude Monet, among others - are believed to have been destroyed. But three of the paintings that survived are on the adjacent wall: "Bather and Rocks" by Paul Cezanne, "Group of Characters" by Pablo Picasso, and "Composition" by Fédor Löwenstein. They last hung together in the Room of the Martyrs, awaiting their fate like many of the Jews of Europe.

Some Impressionist paintings on display at the Jewish Museum, like Matisse's "Girl in Yellow and Blue with Guitar," spent the Holocaust in the personal collections of high-ranking Nazi officials - Hermann Goering in this case.

Others - like Marc Chagall's "Purim," a study for a commissioned St. Petersburg mural he never painted - were confiscated, labeled "degenerate" for their Jewish authors and content. But that didn't stop the Nazis from selling them to fund the war effort. The exhibit calls out these financial incentives that spurred the Nazis to steal from Jewish collectors: It was as much about seizing Jewish wealth as about any ideological beliefs. Germany was in debt when the Nazis came to power, and even "degenerate" art was often sold on the international market "to raise funds for the Nazi war machine" if they thought it would fetch a good price. So the Nazis weren't even principled in their anti-Jewishness; they were happy to profit off of works by Jewish artists and were often motivated by simple greed.

"Purim," painted in 1916-17, contains "folkloric imagery and vivid colors draw from Chagall's memories of his childhood in a Jewish enclave in the Russian empire." Seeing a depiction of a holiday that celebrates Jews surviving persecution in this World War II context is poignant.

The exhibit includes documents from the collection points, in Munich and Offenbach, where the Allies traced the paths of stolen work, stored them when recovered, and eventually tried to "reverse the flow" by sending them back where they belonged. Staring at a map of how far some confiscated Jewish literature had traveled is intimidating in the sheer scope of this staggering pre-internet task.

"Afterlives" also features art by Jews who faced persecution directly - pieces made at the camps themselves or while in hiding. The haunting, delicate drawings of Jacob Barosin, who made them while fleeing to France and ultimately to the U.S., were moving. And the presence of "Battle on a Bridge," a looted painting so revered by the Nazis that Hitler had earmarked it for his future personal Fuhrermuseum in Austria, was chilling. Its inventory number, 2207, is still visible on the back of the canvas.

But what was most captivating about the exhibit was how it helps the visitor imagine what Jewish cultural life was like before the Nazis came to power. I often have the impression that accounts of the Holocaust concentrate more on the horrors of the camps and less and on the individual lives and communities they destroyed. Here, I learned about Jewish gallerist Paul Rosenberg, whose impressive gallery the Nazis co-opted - after seizing his valuable art, of course - for the "Institute of the Study on the Jewish Question," an antisemitic propaganda machine. I learned about his son Alexander, who, while liberating a train with the Free French Forces thought to be full of passengers, recovered some of his father's art against all odds. I saw August Sander's "Persecuted Jews" portrait series from late-'30s Germany, and looked into the faces of people forced to leave their homes. And I saw a huge collection of orphaned Judaica and ritual objects from Danzig (now Gdansk), Poland, where the Jewish community shipped two tons of their treasures to New York for safekeeping in 1939. If no safe free Jews remained in Danzig 15 years later, these items would be entrusted to the museum. None did.

The exhibit also includes the work of four contemporary artists grappling with the contents of "Afterlives" and the era it evokes. Maria Eichhorn pulls from the art restitution work of Hannah Arendt. Hadar Gad uses her painstaking process to paint the disassembly of Danzig's Great Synagogue. Lisa Oppenheim collages the only existing archival photograph of a lost still-life painting with Google Maps images of the clouds above the house where its Jewish owners lived. And Dor Guez, a Palestinian North African artist from Israel, created an installation from objects belonging to his paternal grandparents, who escaped concentration camps in Nazi-occupied Tunisia. They previously ran a theater company, and a manuscript written by his grandfather in his Tunisian Judeo-Arabic dialect was damaged in transit. Guez blew up the unfamiliar handwriting and ink blots into abstracted prints that hang on the wall. In Guez's words, "the words are engulfed in abstract spots, and these become a metaphor for the harmonious conjunction between two Semitic languages, between one mother tongue and another, and between homeland and a new country."

I'll let the exhibit's curators sum up how I felt as I left: "Many of the artists, collectors, and descendants who owned these items are gone, and as the war recedes in time it can become even harder to grasp the traumatic events they endured. Yet through these works, and the histories that attend them, new connections to the past can be forged."

"Afterlives: Recovering the Lost Stories of Looted Art" is on view at the Jewish Museum in Manhattan through Jan. 9, 2022.