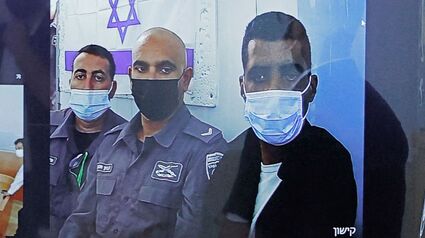 Convicted Palestinian terrorist Zakaria Zubeidi (r) attends via Zoom a court session in the Israeli city of Nazareth on September 19, 2021.

(JTA) - Israel captured the remaining two Palestinian prisoners of the six who riveted the country with their escape from a maximum facility two weeks ago.

Israeli police and army troops surrounded a building in Jenin in the West Bank on Saturday night. The two remaining prisoners emerged and surrendered.

They were Iham Kamamji, 35, who was convicted in the 2006 murder of Eliyahu Asheri, an Israeli 18-year-old who had asked Kamamji for a ride near the West Bank settlement of Ofra, and Monadal Infiat, 26, who was convicted two years ago of belonging to the Islamic Jihad terrorist organizatio...