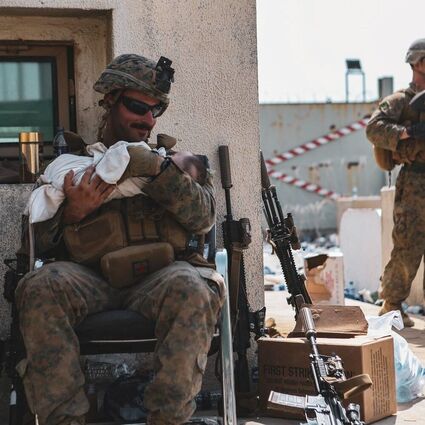 Matt Jaffe smiles at a baby at the Kabul airport in Afghanistan in a photo that went viral.

(JTA) - Meryl Jaffe says she's like any Jewish parent keeping track of her kids on social media, except it can be terrifying.

When she heard President Joe Biden deployed 3,000 Marines to Afghanistan, she had a gut feeling that her son Matt - she calls him Matthew - was among them. Her family was tracking the U.S. Marine Corps on social media to verify their suspicions.

"Matthew's sister, Rebecca, saw it on one of the Marine websites that she follows on Instagram. And she said, 'I think this is Matthew.' We enlarged the picture," Meryl Jaffe, a New York City resident, said in an interview. "...