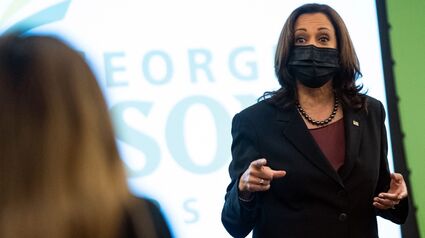 Vice President Kamala Harris speaks to students in a political science class at George Mason University during a surprise visit to campus in Fairfax, Virginia, Sept. 28, 2021.

WASHINGTON (JTA) - Vice President Kamala Harris "strongly disagrees" with a university student who told her that Israel was carrying out "ethnic genocide," her office said, pushing back against claims that she encouraged the student's view.

"Throughout her career, the vice president has been unwavering in her commitment to Israel and to Israel's security," Harris's spokeswoman, Symone Sanders, said Friday in a statement to the Jewish Telegraphic Agency. "While visiting George Mason University to discuss voting rights, a student voiced a personal opinion during a political science class. The...