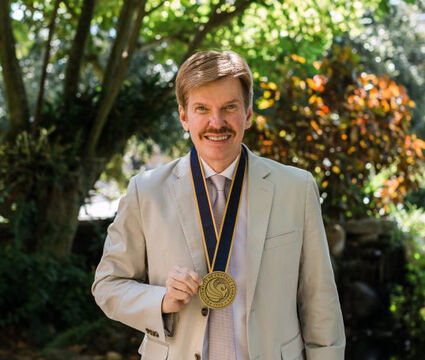 Kenneth Hanson wearing the medallion he received at his investiture ceremony.

Kenneth Hanson, professor and program director of Judaic Studies, was invested into the Tess and Abe Wise Endowed Professorship in Judaic Studies on Thursday, Sept. 30, in a virtual ceremony. The endowed faculty position, which was established thanks to generous gifts from Tess and Abe Wise and their family, recognizes Hanson's accomplishments and will allow him to advance his work and research.

Hanson is an expert on the Dead Sea Scrolls and the co-editor of "The Annotated Passover Haggadah" with renowned scholar Zev Garber. Hanson is also the creator of "The Druze: An Ethnic Minority in the Holy Land," a documentary film shot on location in Israel. The film, which was screened as part of UCF Celebrates the Arts 2021, highlights a small ethnic and religious sect in Israel and has achieved acclaim at international film festivals.

In addition to his scholarship, Hanson is known for his inspired approach to teaching online classes. With the help of UCF's Center for Distributed Learning - along with his own background in television production - he transports online students to the Middle East. He dresses in period-accurate clothing and speaks Hebrew, often using a green screen to place himself at historical and archeological sites.

"Ken is a master of the online modality, using videos and video games to immerse students in the past," Department of History Chair Peter Larson said in his speech at the investiture. "This attention to detail and culture, the blending of the past and present, embodies the spirit of the area studies programs - helping students understand a culture and its past."

The investiture was attended by members of the UCF community including UCF President Alexander Cartwright and College of Arts and Humanities Dean Jeff Moore. Julian Meitin spoke on behalf of the Wise family. UCF Provost Michael Johnson performed the ceremonial duties.

"Recruiting, retaining and supporting the best of the best faculty members often depends on generous support from our community," said Johnson. "A named endowed position signifies a certain level of distinction and excellence, elevating Judaic Studies and the professor who bears the name."

The Tess and Abe Wise Endowed Professorship was established in 2004 and was first held by Moshe Pelli. Pelli served as the first director of the Judaic Studies program, having founded it in 1985. Upon his retirement in 2020, he was named Professor Emeritus in recognition of his scholarship and leadership.

"This wonderful ceremony represents what is for me a very meaningful moment, full of - as we say in Yiddish - lots of nachas: satisfaction and pride," said Hanson "For me, it is the pinnacle of my career and the culmination of a long journey, both personally and professionally. I am more than grateful to the Wise family and to my predecessor, Moshe Pelli, for all the support and encouragement that has nourished me through the years."