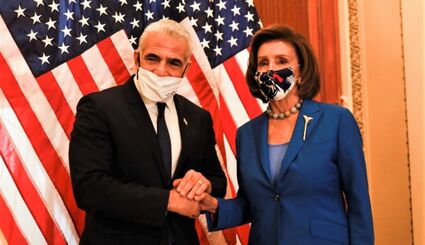 (JNS) - On the first of a three-day visit to Washington, Israeli Foreign Minister Yair Lapid made his rounds in Congress on Tuesday, highlighting the Israeli government's push for bipartisan support for Israel in the United States.

Lapid met with a bipartisan group of U.S. House of Representative members in the early afternoon and held a brief press conference in a Capitol hallway with House Speaker Nancy Pelosi (D-Calif.).

Pelosi began by saying that the U.S.-Israeli relationship has always been and remains bipartisan, stemming from mutual values between the two nations and national intere...