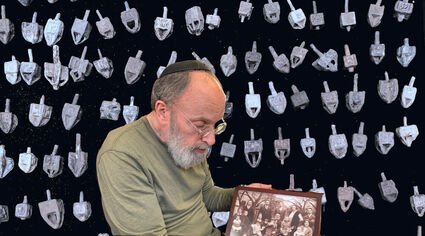 Arthur Kurzweil first encountered amulets and dreidels excavated by treasure hunters during a trip to his father's hometown in Poland. Now he has collected thousands of them.

(JTA) - Even when Arthur Kurzweil sits by himself in his study, he doesn't feel that he's alone. After all, he has the dreidels - all 4,000 of them.

Kurzweil, 70, is a prolific author and editor who has written books about Judaism and magic and his car rides with Talmud scholar Adin Steinsaltz, as well as the Kabbalah and Torah installments in the "... for Dummies" series.

His most significant contribution to Jewish publishing, however, may be his books and teaching about Jewish genealogy: He has exhaustively chronicled his efforts to trace his own family's lineage, including along the many...