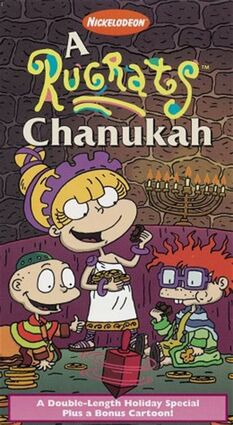 (JTA) - "Arthur's Perfect Christmas," the 2000 TV movie, begins with Arthur sitting at the piano in his jammies singing about how this Christmas is going to be magical - the best one yet. It's clear what holiday is center stage in Arthur's world.

But it's the B plot about the show's Jewish character Francine that speaks to a legitimate Jewish experience - truer than any current kids' Chanukah specials on TV. Francine's best friend, Muffy, refuses to accept that Francine can't attend her Christmas party. Francine tells Muffy 28 times, literally 28 times, that it's on the same night as her family's Chanukah party, but Muffy ignores her, buying her a Christmas gift.

Muffy storms from her party to scream at Francine through the phone.

"But you can see your family any old day," she says. "Besides, it's not like Chanukah is as important as Christmas."

Before my kids were born, I shrugged when people complained about how suffocating Christmas was. I thought they should just get over it: We live in a Christian world. But this year, I realized the influence that television would wield over holidays when my 2 1/2-year-old son Avishai became obsessed with costumes because Mickey Mouse loves Halloween. Suddenly I realized Christmas was racing toward us with a ho, ho, ho.

The problem isn't the lack of Chanukah programming - it's the programming itself. Chanukah specials feature guest characters educating the stars and non-Jewish audience about menorahs and dreidels. Christmas specials feature stars getting presents and chillin' with Santa and reindeer. Joy!

Avishai's favorite channel is Disney Junior. Three of the past four years, the main show to tackle Chanukah has been "Puppy Dog Pals," which juxtaposed segments of Christmas jolliness and Chanukah blah back to back. On Christmas segments, Bingo and Rolly zip off on adventures with elves. The stories never explain why gold shoots out the backs of sleighs, the magic just is, so it's straight into the fun: making and searching for toys. Meanwhile, on their first Chanukah segment, "The Latke Kerfuffle," the pups hunt for eggs and potatoes for latkes, which they find out are "those potato pancakes ... a special Chanukah food." Their Jewish neighbors appear only to explain everything to them. They are barely characters, so you have no reason to invest in them.

On the second "Puppy Dog Pals" Chanukah half-an-episode, "The Dreidel Dilemma," the pups search for a dreidel, which they learn is a "spinny top toy that families play with during the holiday of Chanukah." This year's segment, "Nine Lights Tonight!" is about the pups being called upon by Mrs. Claus - yes, that Mrs. Claus - to save Chanukah. You see, Mrs. Claus has a best friend named Miriam, who we barely meet, and she needs bulbs for her hanukkiyah. The pups team with Randy the reindeer in training, searching for bulbs in a flying sled.

Elsewhere in the Disney Junior universe, last year, "Elena of Avalor" did slightly better with its episode "Festival of Lights." Unlike "Puppy Dog Pals," the Elena episode portrays Chanukah as cool, featuring delicious food and tons of gold stuff. Plus, Princess Rebecca of Galonia has an amazing tiara that seconds as a crowbar.

The episode introduces the royal family of Galonia, who halt the plot to teach Elena and her family about menorahs and gelt. These are all Latin American characters, but the episode shows only a couple cultural similarities. Instead, the Galonians act as tour guides through the foreign Jewish world. There's an emphasis on the Galonians' language, with Elena and her family confused by their weird Yiddish words. While it's true that many Latin American Jews are Ashkenazim, the constant definitions emphasized the culture gap between the Galonians and Avalorans.

To find decent Chanukah programming you need to search. So my family is making our own playlist, watching Jewish characters worth investing in. They may feel alien within the greater culture, but they aren't portrayed as aliens. They don't lecture because they are also figuring things out. Each episode is an adventure my kids love. It's not available on current channels, so your kids' non-Jewish friends won't be in tune with it. Good programming features Jewish protagonists. It isn't aimed at non-Jewish audiences. It portrays Jewish life, uncensored.

The best blueprint is "A Rugrats Chanukah," which debuted in 1996. It features the Rugrats crew finding the "meanie" of Chanukah at the Pickles family's temple. The temple's Chanukah party resembles every temple Chanukah party I've attended, with multiple activity tables and a play starring people named Boris and Shlomo, who can't stand each other. Jewish characters butcher aspects of Judaism, babies wonder what's going on, everyone kvetches, all to traditional tunes. Chuckie's dad, the inquisitive non-Jewish character, wonders, "What's a Shlomo?"

"The Chanukah Shaboom! Special" by BimBam, a defunct YouTube channel that used "digital storytelling to spark connections to Judaism," is a recent gem. The main characters, the Plony family, attempt to impress their non-Jewish guests, the Baloneys, by making Chanukah seem cool. Like "Rugrats," it features traditional songs. With animation clearly inspired by "The Fairly OddParents," characters come from diverse racial backgrounds, resembling my own household (I'm Ashkenazi and my wife is Nigerian and Jamaican). Unlike Elana's attempt at showing the diversity of Jewish and Latin American communities while having the Jewish characters explain themselves, the "Shaboom! Special" normalizes diversity within the Jewish community as something that simply exists, no explanation needed.

At the end of "Arthur's Perfect Christmas," most everyone is disappointed. Christmas didn't live up to Arthur's expectations.

The self-proclaimed "Princess of Christmas" Muffy received 37 gifts, but has no one to brag to because she and Francine are no longer friends. Muffy realizes it's all her fault. On Christmas Day, her family appears at Francine's door bearing ham, which Francine's dad dubiously accepts, saying "uh, thanks." 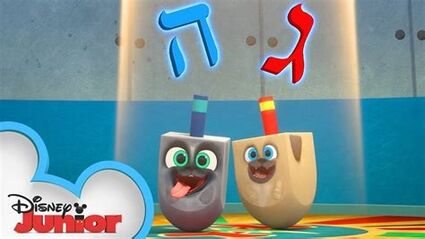 Bingo and Rolly of "Puppy Dog Pals" as dreidels in "The Dreidel Dilemma."

"I'm sorry I didn't listen to you," Muffy says, followed by the buts.

"Come with me," Francine says, grabbing her friend by her wrist and pulling her to a menorah that her great-grandmother brought from Poland. She explains that once a year her family gathers for a potluck, lighting the candles and placing the menorah in the window for the world to see.

"Do you understand why that's really important to me?" Francine asks her friend.

"I'm sorry. I should have listened to you," she says and puts her hand on Francine's shoulder.