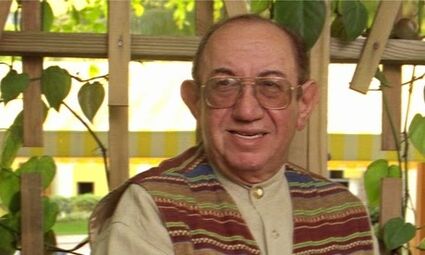 First of all, author Daniel Keyes (born Daniel Korzenstein) was my first cousin. His mom, my aunt Betty, and my mom, Sally, were sisters. Danny's little sister, GAIL, and I were (and still are), extremely close. (She feels like a sister to me.)

Danny wrote the famous book "Flowers For Algernon" which became required reading in some New York City schools. He also wrote "The Minds of Billy Milligan" and other successful books.

What people didn't know (but we in the family did) was that Danny was a fabulous singer. His favorite song to sing was "Dearly Beloved." His dearly beloved were his wonderful wife, Aurea, who died a few years before him, and his two lovely daughters, HILLARY and LESLIE.

Another famous person I knew about ...

Of course you heard of Issur Danielovitch! No? How about if I write Kirk Douglas? Of course you now know. Kirk was a leading box-office star for many years. And he was Jewish! During WWII he served in the Navy. Kirk was the father of four sons. He wrote an autobiography titled "The Ragman's Son" about the poverty he survived as a youngster. Two of his sons followed careers in acting. Famous actor, MICHAEL DOUGLAS is one of them.

BARBARA JOAN (BARBRA) STREISAND, a fabulous singer and actress! (and Jewish!) Barbra went to a rival Brooklyn school (Erasmus Hall and I attended rival Tilden High School.) Barbra is the winner of the EGOT (Emmy, Grammy, Oscar, Tony.) Very few people have achieved this! I am so very proud of my fellow Brooklynite!

I read this in the WJC digest and pass it along to you:

The WJC announced an expansion of its partnership with Facebook to connect users of the social media platform worldwide searching in 12 languages with authoritative information about the Holocaust available on the website AboutHolocaust.org. The WJC developed AboutHolocaust.org with the United Nations Educational, Scientific and Cultural Organization as a comprehensive, accessible online resource providing essential information about the history of the Holocaust and its legacy.

When Facebook users search in any of 12 languages for terms associated with the Holocaust or denial of it, the social media platform will prompt them to visit AboutHolocaust.org. At that site, visitors are provided facts about the genocide of European Jewry and the mass killings of other national, ethnic, political, and other groups by Nazi Germany and its accomplices during World War II.

Directing users to this reliable source is the social media company's latest effort to combat antisemitism and Holocaust denial on its platform. It follows Facebook's expansion of its hate speech policy, which commits to remove content related to Holocaust denial and anti-Semitism.

"Holocaust denial, Holocaust distortion, and the spreading of conspiracy myths about the Holocaust have become cornerstones in the vicious incitement of anti-Semitism hatred on the part of white supremacists, neo-Nazis, and other extreme forces," said WJC President Ambassador RONALD S. LAUDER. "Learning the facts of the Holocaust is crucial to combating all those who deliberately desecrate the memory of the millions who were murdered by Nazi Germany and its multinational accomplices in order to promote their reprehensible agenda. The Holocaust is the ultimate example of what can happen when hatred and malicious lies rooted in deliberate misinformation are allowed to thrive.

The WJC is deeply gratified to work with UNESCO and Facebook to ensure that Facebook's 2.7 billion users are provided with accurate, comprehensive information about the Holocaust. Connecting Facebook users around the world to AboutHolocaust.org contributes greatly to promoting tolerance and empathy as the antidote to resurgent anti-Semitism, xenophobia, bigotry, and hate."

I recently received this letter from our own LAURENCE MORRELL ...

"I recently celebrated my79th birthday! So, nu, what's the big deal you ask. Well, that means I have lived in Orlando 79 years !! Guess what? There are a few (very few by the way) other people living here who have been here a few years longer, just as long or at least over 60 years or longer. Well into the minority of the local Jewish Community. (the readership of the 'HERITAGE-Florida Jewish News'.)

"I would like to suggest that the 'HERITAGE-Florida Jewish News' organize some kind of gathering to allow these people to get together, remember the past (while they still can), tell stories about "Old Orlando: or Old Daytona or Old ????

"I'd suggest the event be held at the JCC in cooperation of the three main synagogues of Orlando, Daytona Beach, and DeLand. Marcia Zerivitz could be a great MC since she is almost one of us, and a great source of information.

"It would be both a fun gathering and an educational event for the community. Just a suggestion from another 'grumpy old man.'"

(I love the suggestion! Oh but wait ... I can't attend! I've been living in Winter Park (from Brooklyn, N.Y.) just under 5 years.

Some great advice: We can all feel overwhelmed at some point, whether with school, work, or just life in general. When you start to feel stressed or get anxious, take a few deep breaths and try stepping away for a break from whatever is making you feel that way. Find a few moments in the day for some "ME" time and collect your thoughts.

Remember to be gracious to others and yourself during stressful moments, and, if you need a little help, we are here to help. From counseling, to our emergency food pantry, to our RIDE program, JFS Orlando is dedicated to putting your wellness first. Call us at (407) 644-7593 or visit JFSorlando.org.

Nancy Ludin, CEO of the Jewish Pavilion and her staff offer some valuable advice on how to pack a hospital bag:

Most expectant parents know to pack a suitcase for their upcoming visit to the hospital. However, everyone - especially seniors - should keep a packed bag at home. Fill it with the necessities, as well as entertainment for yourself. That means pajamas and a change of clothes, toiletries, slip-on shoes, and a book to read. But it also means bringing your medical records and other legal documents. Intake will not know your medical wishes, so it is important to have them with you when you arrive.

Preparing your hospital bag in advance is a great gift to your adult children or neighbors, who can bring it to the hospital immediately without needing to take a detour to your home and comb through drawers until they find everything. My mother has a packed bag of her own, and when she had emergency gall bladder surgery, she asked the paramedic to grab it. He did grab a bag - but not the right one! Now, my mother only has one bag laid out for emergency purposes, so there won't be any confusion again!

A little boy comes home from religious school (formerly Cheder) "What did you learn today?" asks his father.

"Oh, the teacher told us the story about General Moses, how he was leading all the Jews out of Egypt, with General Pharoah's Egyptians hot on their trail. And there was the Red Sea in front of Moses, so he dropped an atomic bomb! Bang! So the waters parted, the Jews got across, and the Egyptians were all drowned."

"Is that what the teacher told you?" gasped the father.

The boy shrugged. "Nope, but if I told it to you the way he did, Pop, you'd never believe it."