This forgotten Chanukah heroine deserves all the love 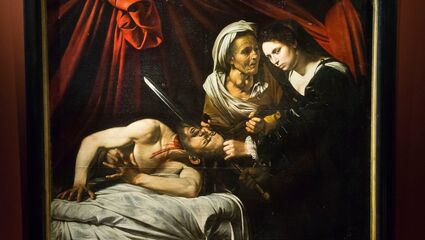 (Alma via JTA) -- Chanukah season means latkes, menorahs and the retelling of the classic story about Judah and the Maccabees. But there's a woman from a few hundred years before Judah was around who is just as important to this story.

This Chanukah, let's bring this forgotten biblical badass back into the spotlight.

She's not mentioned in the Torah. Her earliest known stories aren't even in Hebrew; they're in Greek. And she's on the fringes of medieval texts, at best. And though her story is interwoven with quite a few fictional elements, the story of Judith is too important not to celebrate and share. She is the feminist activist we need right now - she just happens to be from antiquity.

Judith's story starts in Jerusalem centuries before Judah's story of the Maccabean revolt. A widow of three years, she has been in deep mourning, only wearing rags and ashes. And her children are on the brink of starvation, as her city is under siege by the evil Holofernes and his armies, who have been sent by King Nebuchadnezzar of the Babylonian Empire to conquer the city and convert the Jews living there. Though they had fought back against Holofernes as best they could, the Israelites were ready to surrender.

But Judith is not. Determined her city will not fall, she devises a plan and convinces her people that she can singlehandedly defeat their enemies. Judith is disgusted by the faithlessness of the leaders of Jerusalem and tells them that God will act through her.

That night, Judith sheds her mourning clothes, dresses herself in her finest jewels and, with wine and her maid, she leaves the city in the dark.

Alone, the two women walk into the enemy's camp and straight up to the royal tent (that's not something you just, like, did back then). Struck by her beauty, Holofernes asks, "Who are you? Where do you come from and where do you wish to go?"

Judith responds, "I have heard of your wisdom and skill, and since Israel has sinned, I know that you will conquer the city and take possession of it, so I came to save myself and my father's household when you take the city." She promises to help Holofernes conquer the city from the inside, and he invites her into his tent intending to seduce her. She follows him.

Inside, Holofernes indulges in a feast and drinks more than he ever has in celebration of his near victory, with Judith feeding him cheese and pouring him more and more wine. Yes, my friends, cheese and wine are the weapons of choice in this story. RESPECT. Judith feasts, too, but only on what she has brought with her. Holofernes soon falls asleep. Turning her thoughts to God, Judith grabs the sword on his bedpost, and in one swift motion, beheads Holofernes as he sleeps. (OK, so the sword was a weapon, too.)

Judith then takes the head of Holofernes in her bag and swiftly leaves the tent with her maid. The two return unnoticed back to the city walls, where she commands the guards to put his head up high for all of Holofernes' armies to see upon sunrise.

When they wake, Holofernes' men see what has become of him and flee. Jerusalem is safe, thanks to Judith's actions. The Israelites enter the camps and plunder them for their invaluable riches, much needed after years of living under siege.

Judith is given Holofernes' tent and all his possessions. She is blessed by every woman and leads thothem in song and dance. She praises God for giving her the courage and strength needed to save her people. Judith is celebrated for three months.

Though many offer, Judith chooses not to remarry, instead living her life as a free woman. She frees her maid before she dies at the age of 105

This story was once told alongside the more well-known story of Judah and the Maccabees each Chanukah. Both Judah and Judith's names come from the same root and both stories are about military victories that seemed impossible. But mostly, only Judah's story is recounted and celebrated today.

There has been a movement to place Judith back in the forefront of the Chanukah story. Some even eat dairy on Chanukah to commemorate the cheese Judith fed Holofernes before taking his head (cheese latkes, anyone?).

Her story is gruesome. She is a lone woman, determined not to let the children of her city starve or be converted. But instead of cowering and surrendering like the male leaders suggest, Judith decides to take a stand, taking matters (and heads) into her own hands.

Steph Black is a women's studies major at American University.