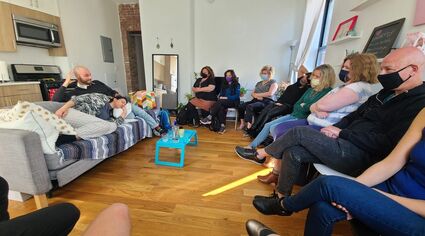 Before a recent production of "Divorced," a play exported to the United States by Tel Aviv's Cameri Theatre and staged in the homes of willing hosts, actors arrive a few hours before showtime to place props around the apartment and decide how they can use the space best for that night's performance.

(New York Jewish Week via JTA) - "Welcome back to live theater!" Yoni Vendriger says, standing before the audience before the show begins. It is, I realize, the first time I've seen a play in a theater since the start of the pandemic in March 2020.

Except the theater, in this case, is an apartment in the Bedford–Stuyvesant neighborhood of Brooklyn, and the "stage" is, for most of the show, the living room couch.

About 15 of us make up the audience, most of them friends of the apartment's residents. Everyone in the room is in their 20s, and it feels more like a house party than a play...