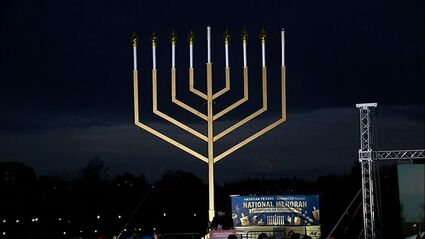 The National Menorah lighting in Washington, D.C. in 2017.

(JNS) - The North MoPac Expressway runs up Austin's west side, a busy, eight-lane artery that speaks to the city's expanding suburbs and the extravagant consumption of space that is uniquely Texan. It's not a place that seems conducive to anti-Semitic demonstrations-or demonstrations of any kind, for that matter. But late last month, the MoPac came to national attention when a banner appeared on an overpass reading "Vax the Jews." The sign bore the name of a neo-Nazi group. Several men were seen beside it giving the Nazi salute to passing cars.

The banner was one in a string of anti-Semiti...