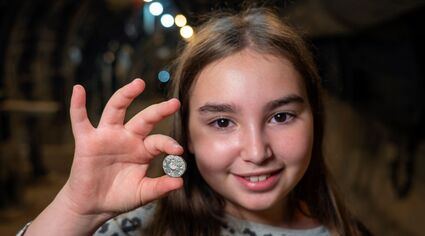 Liel Krutokop holds the coin she found in Jerusalem.

(JTA) - An 11-year-old girl found a rare silver coin dating from approximately 67-68 CE in dirt from excavations at the City of David park in Jerusalem.

Liel Krutokop was visiting the site with her family recently to sift dirt from an archeological dig when she found the coin, according to the Israel Antiquities Authority.

"We poured the bucket with the dirt on the strainer, and as we filtered the stones that were inside, I saw something round," Krutokop said of the moment when she found the coin in a statement.

After cleaning and examining the coin, archaeologists overseeing the site belie...