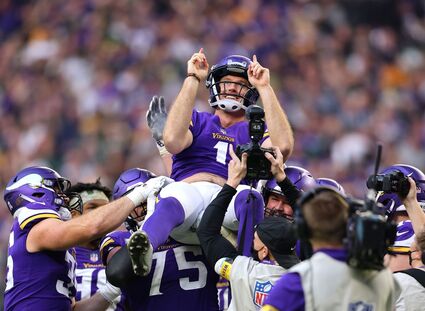 Greg Joseph celebrates with his Minnesota Vikings teammates after kicking a game-winning field goal against the Green Bay Packers at U.S. Bank Stadium in Minneapolis, Nov. 21, 2021.

(JTA) - The only Jewish kicker in the NFL for years now, Greg Joseph is used to how mentally taxing the position can be. On Sunday, he found himself in another one of its do-or-die situations.

With two seconds left to go in a tied game against the division-leading Green Bay Packers on Sunday, Joseph kicked his Minnesota Vikings to victory with a 29-yard field goal, keeping the team's playoff hopes alive. He was carried off the field by his teammates.

Joseph, who attended Jewish schools in Florida after immigrating from South Africa, said he deals with the pressure of being a kicker by worki...