Reuniting women through the sisterhood of challah 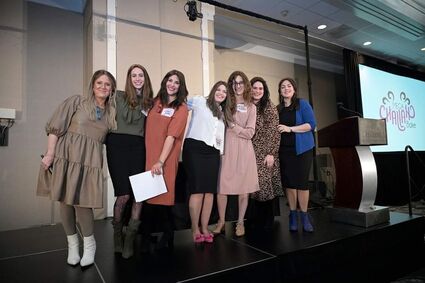 The Mega Challah Bake has re-introduced the joy of challah-making to women throughout the Orlando area, following a year and a half Covid break. On Thursday, Nov. 11, Orlando's Chabad Centers brought the Mega Challah Bake back to Central Florida. One-hundred and fifty Jewish women of all affiliations joined together to prepare and bake challah as a collective, representing participation from all eight of Central Florida's Chabad Centers (South Orlando Chabad held their event on the same night in a different location to cater to women in that area.). While Challah Bakes in year's prior had up to 500 participants, adjustments were made in group size to accommodate health guidelines, and to enhance the comfort of the bakers. The Challah Bake was led by the women of Chabad (co-directors of each center or Schluchos), who each brought something unique to the table, which they shared at the gathering held at the Hilton Hotel Orlando Altamonte.

"We come together tonight as woman from all walks of life and every corner of Orlando to bake challah as a collective and unified people. We are sisters praying together," said Mussie Bronstein, co-director of Chabad Altamonte Springs.

Devorah Leah Dubov, co-director of Chabad of Orlando, noted that the women of Chabad were leading the attendees through "one of the most powerful mitzvot in Judaism," with women empowered by three of the most important roles in Judaism: the lighting of the Shabbat candles, baking the challah, and mikvah observance.

Chanshy Majesky, co-director of Chabad of North Orlando, commented, "G-d is lovingly listening and eager to fulfill all the requests of the prayers of the women during the prayers at those times."

The diverse group of Jewish women had many reasons for attending. Second-time Challah Bake attendee, Patti Boughan, noted that she returned to the event because she enjoyed the company of friends (whom she had missed), while renewing an age-old tradition. Pam Licht, a 30-year-active Chabad member and a challah bake "regular", said, "One of the things I like best about Chabad (and the Challah Bake) is the women's sisterhood. The women sitting together and the closeness of the women learning together and building camaraderie together." She referred to the women of Chabad as the "most elevated woman in Judaism," noting the leadership role of women in each Chabad center.

As Licht pointed out, the evening was an opportunity for both camaraderie and education. The mitzvah of separating a portion of the challah dough was explained as going back to the times of the Holy Temple when a piece of challah was given to the kohen (priest). Today, in a special moment of introspection during challah preparation, a portion of dough is separated and then blessed. Challah bakers were instructed to separate a piece of dough about the size of a small egg and to recite a prayer. This piece of dough was to be set aside and burnt or discarded. 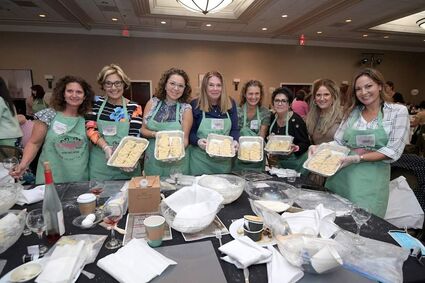 Following more discussion about the intricacies of challah-making, the Mega Challah Bake began. The participants, who had premeasured ingredients neatly packaged on their plates, were directed to rip open the package of yeast on their plates, and to add water, followed by a pinch of sugar. As the dry and wet ingredients were mixed with one another, the challahs came together quickly. The feeling of sisterhood was palpable, as the women adorned in matching aprons, kneaded, rolled, and separated the dough. Participants lent one another a hand when needed and gave guidance when asked.

When the dough was prepared, a challah meditation was introduced, encouraging a moment of reflection. "Place your hand on the dough - dough you created with love, dough that connects us to women for thousands of years who have made this dough during difficult and during joyful times."

After the women enjoyed an evening of soup and salad, it was time to braid the challahs. Participants were introduced to both a four and six strand weaving technique. As the evening came to an end, 150 women left with beautifully shaped loaves of bread, tying the participants to Jewish women throughout history with this shared experience.