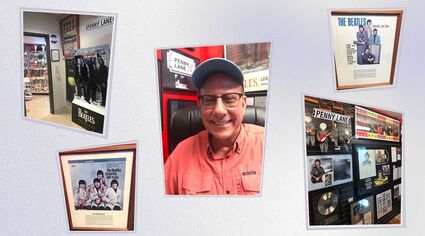 A portion of the exhibits at the Penny Lane museum and Bobby Enter, founder of the museum.

(Jewish Press of Pinellas County via JTA) - Bobby Entel didn't watch The Beatles' Feb. 9, 1964 performance on the Ed Sullivan Show. He was seven years old at the time and in bed. Nor did he ever see them in person, visit their hometown of Liverpool, or cross Abbey Road.

But he's more than made up for that. When he's not working as a radiologist in Dunedin, Florida, he can often be found at Penny Lane, the free museum he opened in 2018 that features his extensive collection of Beatles memorabilia. That's where he goes to escape the realities of life.