A symbol of resilience, this 'tree of life' offshoot is planted in NYC 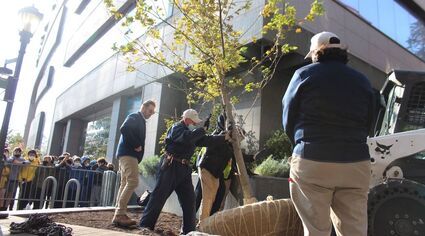 Students from Battery Park City School watch as silver maple was planted in Battery Park outside the Museum of Jewish Heritage. The dedication ceremony was held on Dec. 2.

(New York Jewish Week via JTA) - In January of 1943, Irma Lauscher, a teacher at the Theresienstadt concentration camp in Czechoslovakia, smuggled a tree into the camp so that the Jewish children imprisoned by the Nazis could celebrate Tu B'Shevat in a secret ceremony. The children used their water rations to nurture the sapling.

Of the 15,000 children who were imprisoned in Theresienstadt during the Holocaust, fewer than 200 survived. But the tree was still standing when the camp was liberated in 1945, and a sign was placed at its base marking it as a symbol of resilience.