Musicians, politicians and a 'Housewives of New York' star speak out against antisemitism at Times Square event 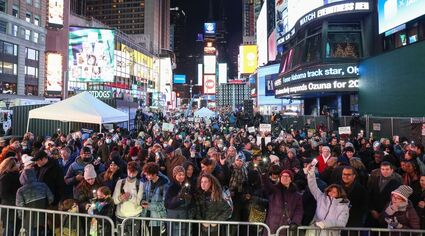 Hundreds gather in Times Square for the Shine a Light on Antisemitism event marking the second night of Hanukkah, Nov. 29, 2021.

(New York Jewish Week via JTA) - Hundreds gathered in Times Square Monday to celebrate the second night of Chanukah, with live music, speeches and, of course, a public menorah lighting.

But it wasn't just about feel-good holiday cheer: The event was part of the "Shine a Light on Antisemitism" campaign, which aims to raise awareness about antisemitism in order to encourage individuals and their communities to fight against it.

The campaign, which is sponsored by more than 60 North American organizations and corporations, both Jewish and non-Jewish, was formed by a coalition of major Jewish a...