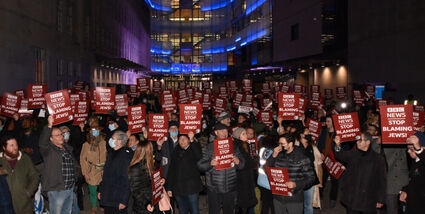 (JNS) — As many as 250 Britons stood outside of the headquarters of the publicly funded British Broadcasting Corporation in London on Monday night to demand that it take accountability for anti-Jewish coverage on the network.

There, they chanted “BBC, where the proof? BBC, tell the truth” in response to an on-air report during Chanukah about an attack on a bus full of Jewish teens in Central London. In its coverage of the event, according to Campaign Against Antisemitism, the BCC reported that racial slurs against Muslims were made by young riders.

“This incident is one of many i...