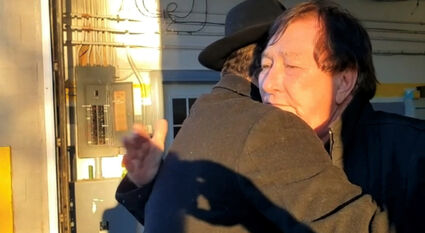 Rabbi Shlomo Litvin, co-director of Chabad of the Bluegrass, embraces a resident in one of Kentucky's hard-hit areas after a series of tornadoes decimated homes and other buildings in parts of the state, December 2021.

(JNS) - The last time Rabbi Shlomo Litvin, co-director of Chabad of the Bluegrass, had been in Hopkinsville, Ky., he was joined by thousands of other people to see a total eclipse.

He returned to the area on Monday to find a much-changed landscape after a massive tornado ripped through the western part of the state on Dec. 10, rendering much of it temporarily uninhabitable. The tornado was one of a series of others that struck six Midwestern states on Dec. 10.

"The kindness they had shown to tourists during the eclipse was overwhelming, and to come back now and see the devastation was heart...