Called to the bima for the second time in his life 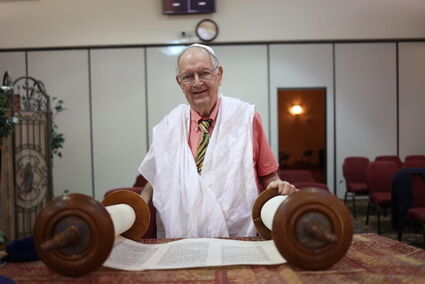 Marvin Friedman was called to the Torah for the second time in his life as a bar mitzvah on Saturday, Jan. 8, 2022, at Chabad of Greater Orlando.

Friedman was first called to the Torah in 1955 in Cincinnati, Ohio.

The following is a letter Friedman, a graduate of MIT, shared with MIT Hillel news.

A renewal of my Jewish identity

I am 80 years old and just celebrated my second bar mitzvah. This was all about reestablishing my identity as a Jew.

On Jan. 8, 2022, I was called to the Torah, 67 years after my first bar mitzvah in Cincinnati, Ohio, in 1955, after which I then became a practicing, assimilated Jew. While knowing and professing Judaism and performing holiday celebrations at home, the religion was more mechanical than spiritual. Since 1967, I have had roles in research institutes, academia, and the private sector. I reasoned that it was my prime responsibility to earn a living and take care of my family financially, and I failed to transmit my Jewish heritage or appreciation of Jewish literature to my family. While cognizant of my Jewish heritage, my secular and professional life was predominant in determining my self-identity. Neither of my sons celebrated becoming a bar mitzvah, and we seldom observed Shabbat. We observed the Jewish holidays mechanically, not with loving understanding. Chanukah, for example, was all about latkes and not about the formation of the Jewish Nation.

The Talmud says that after 70 years, I have completed a full life, and that is true for me, at least. I have a wonderful family, loving grandchildren, traveled the world, had a successful professional life. More than my share of nachas. I have a sense of continuum that extends through my father, which I viewed as a heritage of my family who emigrated from Eastern Europe. My rabbi describes it as a spark of Jewishness. I found myself drawn to Torah after my first wife passed away in 2016, at about the same time I retired from professional life. It is difficult to explain how losing my spouse and losing my identity as an academician and professional toxicologist affected how I viewed myself.

At that time, I realized that spiritual life had passed me by. And, it was apparent that I had an opportunity at a new spiritual life and Jewish identity. I subscribed to My Jewish Learning and to online Talmud and Prophets courses. Perhaps only MIT alums would appreciate that I have become fascinated with such minutiae as the definition of what constitutes a sukkah, when the Sh'mita/Sabbatical year for crops begins and ends, or how Noah got involved with creating a vineyard. My rabbis have been bombarded with questions. I have tried to get a complete picture of how Judaism and Torah have impacted the world. I found a practicing Conservative Jewish wife on JDate with a strong Jewish identity and found a religious home at the Chabad of Greater Orlando. I began a dialogue with our rabbis and began attending Shabbat services.

As I began to explore Jewish texts, Talmud study took some getting used to, and yet I grew to love the Talmudic discussions on biblical law. Since my job was regulatory affairs, reading the Torah was a natural. I had a great deal of trouble with the Talmud and Oral Law as it was imprecise, and I did not believe it was given by Hashem. "Oral Law" does not exist in federal regulation.

Now, as in 1955, it was time to make a new covenant with God and read from the Torah. Over the past year, I have been taking bar mitzvah lessons and participating in more Jewish activities - and now have become a bar mitzvah again. My Torah reading for both times I celebrated my bar mitzvah dealt with the Exodus from Egypt (what a coincidence). While previously I would discuss with my friends how the Nile might have turned red, now I discuss the strategy by which God created the Jewish Nation. It is, and continues to be, quite the journey.