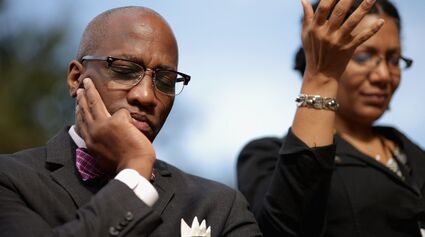 Rev. J. Herbert Nelson, then the director of the Presbyterian Church Office of Public Witness, at a prayer service outside the United Methodist Building on Capitol Hill, Oct. 8, 2013.

(JTA) - U.S. Jewish groups slammed a top Presbyterian Church official for Martin Luther King Day remarks that equated Israel's West Bank "occupation" with slavery and implied that American Jews have the influence to get the U.S. government to end it.

"The continued occupation in Palestine/Israel is 21st-century slavery and should be abolished immediately," Rev. J. Herbert Nelson, II, the stated clerk of the Presbyterian Church USA said in remarks released Monday.

"Given the history of Jewish humble beginnings and persecution, there should be no ambiguity as to the ethical, moral, and dehuma...