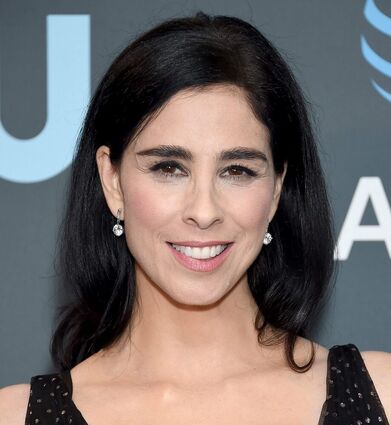 I'm referring to all the stars I write about. For instance, SARAH SILVERMAN. SARAH is an American comedian, actress, and writer. Her comedy addresses social taboos and controversial topics, including racism, sexism, homophobia, politics (politics gives me heartburn!) and religion, sometimes having her comic character endorse them in a satirical or deadpan fashion.

Sarah was a writer and a performer on "Saturday Night Live" and also she starred and produced "The Sarah Silverman program on "Comedy Central."

Sarah also wrote an autobiography titled "The Bedwetter" in 2010. (I feel I must read it to see if she is writing about herself!) She is Jewish, of course and one of her sisters is even a rabbi and living with her family in Jerusalem, Israel.

Another "angry" comic (sort of) is LEWIS BLACK. His comedy routines often escalate into angry rants about history, politics (here we go again!) religion, and other cultural trends.

Lewis was raised in a middle-class Jewish family. His grandparents emigrated from the Russian Empire. His paternal grandfather was named Leib Blech ... later changed to Lewis Black. Lewis also wrote a book. It is titled "Nothing's Sacred." (I agree).

(I had the pleasure of seeing Lewis on JIMMY FALLON's "Tonight Show" recently ... and I laughed and laughed, something I haven't done much of since the start of this pandemic!)

A message from the World Jewish Congress about anti-Semitism ...

I read this in a note I received from WJC President Ambassador RONALD S. LAUDER and pass it along to you in part:

"Antisemitic harassment, vandalism, intimidation and violence are at unbearable levels in many countries around the world. It is up to all of us to come together as one united family and do everything in our power to create a future in which this vile hatred is nothing more than a relic of the past.

While others may ignore, deny or downplay the danger, the WJC will not keep its head in the sand. We must expose the threats against Jews and respond as never before... whether it's one Jew or thousands who are in danger, whether it's across the country or around the globe. I urge you to stand strong with the WJC to make it very clear that intolerance and hatred have no place in any society. "

Some European Jews in their own words ...

From Denmark: "The way things are now, I experience, for example, that 'Jew' is a widespread cuss word in Copenhagen. As a Jew who has grown up in Denmark, I have always avoided telling people I am a Jew."

From Germany: "For the past 12 years, antisemitism has no longer been a taboo in Germany, and so it occurs more often ... verbally and physically ... on German streets and in social media."

From Spain: "The looks I receive in the community center have potential for physical violence in my home country of Spain, but even worse are the uglier comments on social media."

(I honestly felt sick when reporting this!)

The following is news from all over the world ...

From Germany: On the one-year anniversary of the Yom Kippur attack in Halle, Germany, which left two dead, the German-Jewish community in Hamburg once again confronted a violent, antisemitic act of terror. During a Sukkot celebration for students at the Hohe Weide Synagoge, an individual; wearing a military style uniform viciously attacked a student.

From Belgium: A Belgian newspaper ran a caricature that referred to the Orthodox Jewish neighborhood of Antwerp as "coronavirus village."

From France: A far-right conspiracy channel called "Jean Monnale" reposted a video of the Great Rabbi of Morocco singing and claimed that he was saying that Jews celebrate the death of non-Jews from COVID-19.

From Greece: The web outlet "sfedona.gr" published an open letter signed by 172 Christian fundamentalists, who opposed the coronavirus restrictions that would close churches. The letter called upon bishops to opposed the "plans of the Zionists for world domination through the decrease of population and the implementation of the Protocols of the Elders of Zion."

From Iran: (No surprise here!) Iran's press TV, a leading English language media outlet backed by the regime, claimed that Zionists are behind the pandemic.

(This was a world-view of antisemitism and hate.)

And some headlines of ours:

FromThe New York Times: "Once in the shadows, Europe's Neo-Fascists are re-emerging."

From the Wall Street Journal: "Amid the pandemic, anti-Semitism flares up."

From the Atlantic: "There is a new form of brutal and violent anti-Semitism in France."

From the Guardian: "Anti-Semitic attacks in the UK at an all-time high."

(This is series business. We must get involved with the WJC now! They are relying on our support. We are all responsible for one another.)

A note from BARBARA GOLDBERG:

"We have an opportunity for our members to see a play at UCF Main Stage theater on Sunday, Feb. 6. The play's title is "Indecent." This is a play based on true events surrounding a play by Sholom Asch. The cast was arrested for showing love between two women. There are also references to the Holocaust and antisemitism. Tickets are free."

Feb. 7th - Maitland performance arts will bring us a music duo by Robert and Jon, each first Monday of the month.

Unplug for a day. There are several benefits from having a blackout day from all communications. Put your cell phone in the other room, turn off the news, and put the binge watching on hold. Free some mental processing power and give yourself some extra time in the day. Take this time to go for a walk and enjoy nature, breathe some fresh air, and appreciate the world around you. Making little adjustments every day can have a big impact on your overall wellness. JFS counselors are available to help you build your own wellness plan with healthy habits. To learn more about JFS Orlando's FAMILY of services, visit JFSorlando.org or call (407) 644-7593.

Correction: In the past these Wellness reminders were under the heading of the Jewish Federation. However, they are from Jewish Family Services and are posted in the Federation's weekly emails.

The Orlando Senior Help Desk is a free referral service sponsored by NANCY LUDIN and the Jewish Pavilion that helps all seniors and their families to find resources in Central Florida. 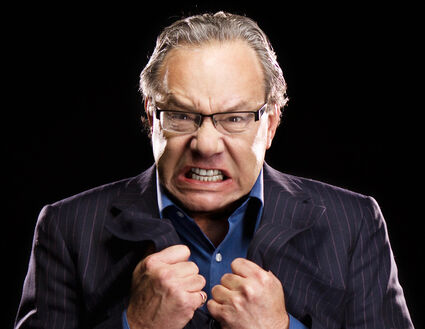 Find out more at  www.orlandoseniorhelpdesk.org or make a donation at www.jewishpavilion.org/donate to help. Contact them at 407-678-9363.

Grandma Esther was walking along the beach with her cherished five-year-old grandson by her side. Suddenly a huge wave washed over them and swept the child out to sea.

"Oh Lord," cried the grandmother. "What have you done? That boy is my whole life. If you just bring back that boy alive I'll do anything. I'll be the best person. I'll give to charity. I'll work for the poor and the sick. I'll go to synagogue every day. Please God just give him back to me."

At that moment, a huge wave came up and washed the child onto the sand. He was safe and sound. His grandmother looked him over and then looked up to heaven. "Okay" she said. "So where's his hat?"