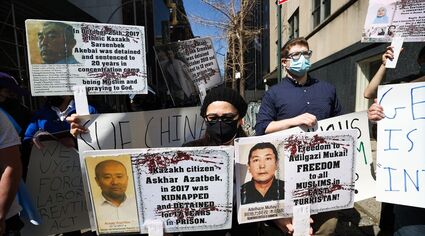 Tayfun Coskun/Anadolu Agency via Getty Images Protesters against China's policies toward the Uighurs demonstrate outside U.N. headquarters in New York City, March 22, 2021. The protester in the foreground is wearing a kippah.

(JTA) - A full-page advertisement in The New York Times on Saturday paid for by the Elie Wiesel Foundation for Humanity urged athletes and corporate sponsors to "walk away" from the Olympic Games, set to begin next month in Beijing, to protest China's persecution of the Uighurs.

"We urge the athletes and the sponsoring corporations to walk away from these games unless Beijing takes steps to reunite Uyghur families. And we urge the world's citizens to embrace the cause of this persecuted population," the ad stated.

The ad was signed by the prominent French Jewish philosopher Bernard-Henri Le...